Spartan Games announced the 2nd edition of Dystopian Wars and a two-player starter set to be released on May 21st: 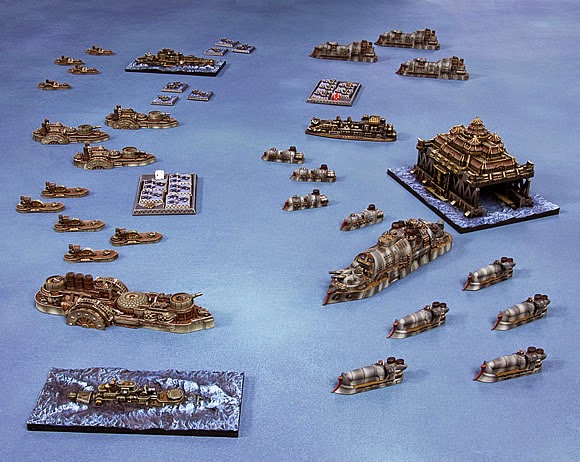 Set in the waters around South America, Operation Shadow Hunter pits two bitter enemies against each other: the Empire of the Blazing Sun and the Federated States of America.

In territory that once belonged to the Republic of Argentina, the forces of the Empire of the Blazing Sun are once again on the move. Their plan is complex, their overall objective still a secret, but the dice have already been rolled and the battle lines drawn. The eastern forces have a new and deadly ally. The infamous Wani have returned from exile, contributing never-before-seen technology to seal their new pact of service with the Empire.

To the north, the Federated States of America has responded with speed to the loss of its own vessels, both military and civilian. In a bid to counter the mysterious ‘Ghost Ship’ the chief scientists of this great nation have accelerated development of their own secret weapon – the Boston Class Submersible – and the American Admirals are eager to prove it in battle. Designed to engage and destroy even the most formidable enemy ships, the Boston Class comes armed with the latest advanced weaponry and a complement of Assault Subs.
The scene is set for lethal conflict as two of the deadliest naval forces on the planet clash in the once calm waters off the coast of Brazil.