Maha Yodha also happens to be the name of a card game that celebrates the rich mythology and ancient culture of the Hindu faith, which has not really been explored (if at all?) in tabletop gaming.  This game is being launched on Kickstarter on May 7th, so if you like what you read here, be sure to check it out and back it.  Maha Yodha, a game 4000 years in the making!

Maha Yodha is a Card Game that brings to life the epic battles and immortal tales from India’s mythical past. Your deck of cards has legendary warrior cards along with powerful weapon and scroll cards. Your deck signifies your faction and you are its commander. Fight against other factions & use war-craft and clever strategies to lead your faction to victory and emerge as the ‘Maha Yodha’.

Maha Yodha was designed as a simple and quick 2 player game that also features deep tactical maneuvering of hand management. It is an introduction for beginners who are making their first steps in the world of themed card games.

The prototype we received to preview features two of the decks of the factions that will be made available.  In this preview we will see the Adityas (white deck) and Asuras (black deck), each with its own slightly different style of playing.  What’s that you say?  Another Collectible Card Game?  The creators assure us this is not the same as your average CCG.  In fact, they don’t want to have you dealing with “rares” and the like at all.  You buy a deck, and that is your deck.  There is no bonus for having more money and time available to you than your opponent.

The way to win is to bring your opponent’s life (which starts at 20) down to zero.

Each turn, as you place warriors, weapons and scrolls (by spending ‘valour’ points), you ‘attack’ and deal damage to the opponent equal to the attacking strength of the warrior minus the total Defence of the defender. Beware though; if your attacking strength is less than your opponent’s Defence you take damage equal to the difference instead. 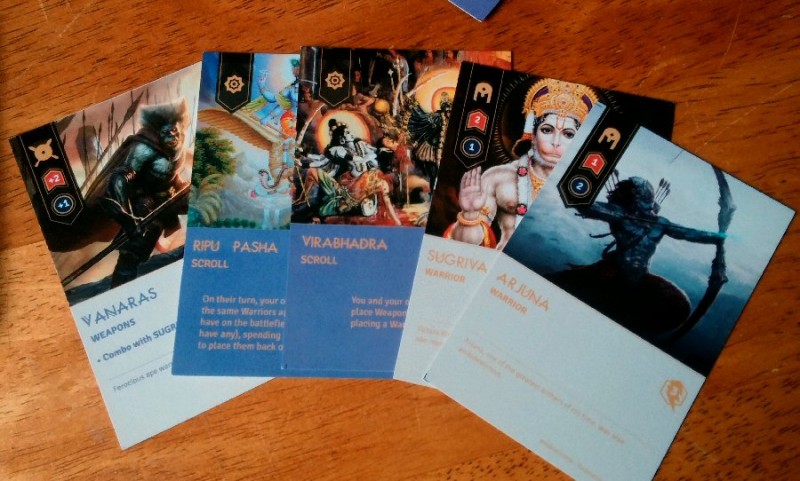 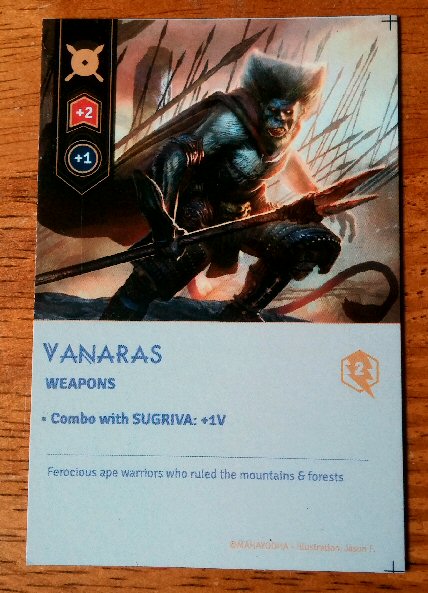 There are three types of cards that are played in Maha Yodha.  They are Warrior, Weapon and Scroll cards.  Each card has its rules and details printed directly on it, such as Attack, defense and any special abilities and a little bit of trivia knowledge (Who says you can’t learn while playing a game?).

Warrior cards are used to attack, obviously.  You can place any number of warriors as long as you have enough Valour to spend.  Weapons can be added to warrior cards to provide additional attack and/or defense values and you can add any number of weapons to a warrior card.  Each weapon has a corresponding warrior that it will work best with giving you special bonuses beyond the additional attack and defense.  Scrolls are cards that feature special abilities.  These abilities remain in effect as long as they are in play.

And can we just say; the artwork on these cards is beautifully done!  The only drawback we found in the look of the game is that some of the cards have a yellow on white fine print text that can be difficult to read.  If they fix this and make the text match the rest of the deck (purple on white) then that complaint is easily erased. (** EDIT : The makers are aware of this issue and promise it will be rectified in the final product)

Each player chooses their deck and shuffles it.

The player going first (however you choose to decide this as the rules don’t specify any particular way) draws 5 cards as their initial hand and they may discard the entire hand and redraw (after revealing it to their opponent) if it contains no warriors.

The second player then does the same.

Setup is as simple as that, and now you’re ready to play!

Gameplay is very straight forward and fast.  Anyone who has ever played Magic : The Gathering will find it even easier as it has some similar mechanics, cutting out much of the more involved and difficult aspects.

First you must discard any scroll cards you have on the battlefield, pick up into your hand any warriors and weapons previously played (aha, very unlike Magic there), and then discard any number of cards (of your choice, if you choose to discard any at all) from your hand.  You then have to draw new cards up to the hand limit of 5 (if you want to keep what you picked up and you’re already at 5, you simply don’t draw new cards)(again, unlike Magic .. good, now we’re getting somewhere different).

Each turn you have 5 Valour points that are spent to lay cards in any combination.  Some cards may add more Valour points, most of them however cost you a specific number of points, as listed on the card with a little lightning bolt symbol, and you cannot lay a card if it costs more Valour than you have available.  This is a very easy way to determine what you can lay.  There is not fiddly adding up points based on what you’ve got on the table.  You always have 5 points, period, end of story (unless of course you add more by playing cards that tell you to in that turn).  Simple!

You then add up your total attack value and if your Attack is higher than the opponents Defense value, you deal damage equal to the difference (attack-defense=damage)!  If your attack value is LOWER than your opponents defense you take damage yourself instead (oops).

When your opponent is reduced to zero (0) health from your original 20, the game is over and you win.

Maha Yodha is a 2 player CCG with some familiar (and some not so familiar) mechanics that plays in 20-30 minutes and is very easy to learn, with stunningly beautiful artwork and fun history and facts.

A couple of minor issues we found that the creators have a lot of time to look into fixing;

Certainly nothing major there to be worried about as I imagine most of the wrinkles will be ironed out before the game goes into production.

Overall the game has been very well designed and illustrated.  Maha Yodha would make a great “conversation piece” type of card game for most players (due to the history and mythology that is so often unexplored) and we think it would make a decent addition to your collection even if only for that reason, let alone the gameplay value.