WizKids has provided a special peek at some of the incredible Chase figures coming up in the Marvel HeroClix: Avengers Assemble set!

Throughout the history of the Avengers, many heroes have come and gone, and many have been a part of the team under a variety of guises and power sets. Hank Pym could field the starting 5 of a basketball team on his own! In the spirit of these heroes taking on different identities, our chases explore some of the signature alternate appearances of some of the most popular members of the team! Today, we’re going to take a look at the alternate identities of two Secret Avengers, Black Widow and Hawke…er…we mean, Goliath!

Goliath is a 98 point indomitable behemoth, who has the unique ability via his trait Baack to the Blond-Haired Bowslinger Named Hawkeye! to switch between his gargantuan likeness and the more familiar purple duds of everyone’s favorite avenging archer. This can be done via free action, as long as the replacement is named Hawkeye of equal or less points. The character in question gets placed on their same click number minus 3, to a minimum of 1. He also has a couple of signature special powers of someone of giant size, one on his attack called Growing Larger, which allows Goliath the ability to use Quake. Additionally, when he makes a close combat attack, all characters within 4 squares and line of fire are considered adjacent! Coupled with that for two clicks is his special damage power Ground Squash, which states that characters hit by his attacks can’t automatically break away, in addition to modifying their break away rolls by -1 until your next turn! He’s not afraid to put the boot down and put enemies in their place! Goliath also comes with a myriad of other powers you’d expect from a giant sized character, including Charge, Super Strength, and Invulnerability, amongst others. 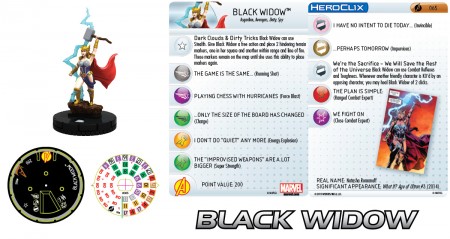 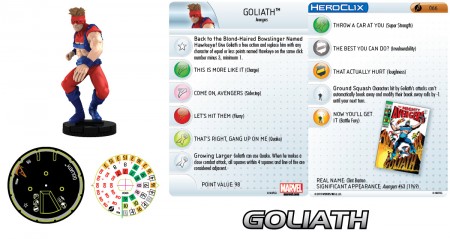 Black Widow eschews her normal archetype with her Asgardian form, hoisting mighty Mjolnir in an attempt to drive back the oncoming storm! First appearing in What If? Age of Ultron #3, this version of the Black Widow is amped up to 11 (on her attack at least!), with the powers of a Norse god to go along with her already brilliant tactical mind. To start, she’s a 200-point indomitable powerhouse, sporting a range of 7 squares with 2 targets. She has a trait called Dark Clouds & Dirty Tricks, which grants her the continued use of Stealth. In addition to that, she can also be given a free action, allowing her to place 2 hindering terrain markers – one in the square she currently occupies, and another within range and line of fire. These two markers will remain on the map until she uses this ability to place markers again. She also has a special defensive power called We’re the Sacrifice – We Will Save the Rest of the Universe granting her Combat Reflexes and Toughness. And, when any other friendly character is KO’d by an opposing character, you may then heal Black Widow of 2 clicks of life.

Truly, the Black Widow in possession of the hammer of Thor is a terrifying force for enemies of the Avengers to oppose! Running Shot, Energy Explosion, Invincible, and Ranged Combat Expert represent her godlike powers, alongside many others. In addition to both Asgardian and Avengers themed teams, Black Widow can also be a part of a Deity or Spy themed team.