Written by Anatoli on August 11th, 2015 at Anatoli’s Game Room

I was talked into picking up Frostgrave by a friend down at the club. I was quite skeptic about it, the bits that I had read did not really jump out at me but I figured that painting up a few fantasy themed miniatures would benefit my collection. At worst I would have a warband for whatever skirmish based fantasy game system out there if Frostgrave didn’t pan out.

Having read the rules through, back to back a couple of times, and played the game twice I feel confident enough to at least give an “early” review of the game.

At the core, Frostgrave is a skirmish based fairly generic/open ended fantasy game with a hint of Mordheim in terms of the setting. You command a wizard, his apprentice and up to 8 hired goons as they search for lost treasures in the ruins of “Frostgrave” a fallen city long abandoned to the ice and snow – inhabited mostly by zombies, undead and the odd creature or animal. The unique selling point of the game would be that your warband and indeed the entire campaign centers around your wizard.  Oh, and you use D20 dice!

That the game is written with the wizards in mind become even more apparent when you read the character profiles. Hired muscle characters come with static gold cost, equipment and stats – compared to the highly diverse choices that you have when picking spells for your wizard. This can probably be frowned upon by some who want to tailor their own characters, and all characters, in a warband. For others, this may be a welcome escape from having to put a lot of work in “building” your warband and focus on the wizard and spell combos instead.

Characters have six stats in the game:

Each character also has 2 actions each turn, but you are only allowed to cast spells, or fight/shoot with a single action. You can however use both actions for movement, in that case you move full rate with your first action and half rate with your second action. For instance  a character with Move 6 can move up to 9 inches (6+3).

Wizards (and the apprentice) have the same stats as described above, but also have an array of magic spells at their disposal. And it is here that the character customization part comes in. You can pick one of 10 schools of magic for your starting wizard. Each school has 8 spells, and they have varied casting difficulties. Spells for the starting wizard are picked from his own school, aligned schools and neutral schools – but may down the line of a campaign also be picked from the opposed school.   What this means in practice is that you pick a main school that you fancy, in my case it is the “Witch”. I get 3 “Witch” spells. But I am not locked to only casting spells from my school as I get to pick 3 spells from aligned schools (one each from Enchanter, Necromancer and Summoner) as well as two spells from different neutral schools (Thaumaturge, Illusionist, Elementalis, Sigilist, Chronomancer). 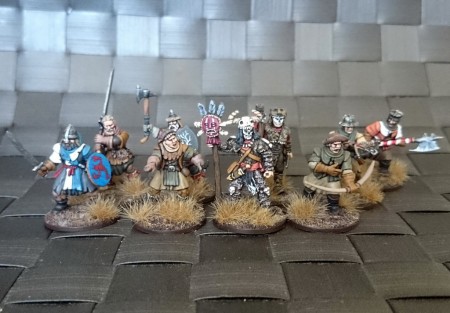 So I have a Witch that can elect to branch out into several different directions to support my main casting abilities. Finding useful combos and spells from schools outside of your own is both fun and rewarding.
There are of course modifiers for spells outside your own school. Casting Witch spells comes with no negative modifier. But casting Aligned spells come at a negative modifier of 2, spells that are neutral with a modifier of 4 and opposed school spells at a modifier of 6. This restriction helps to maintain something of a direction for your Wizard to stick to his own and aligned schools primarily and have the choice of school matter during character creation. The apprentice knows the exact same spells as the Wizard, but is slightly worse at casting all spells as he comes with a permanent negative modifier of 2 built into his casting ability.

Worth mentioning is that as the campaign progress, and your wizard gains experience levels he can tweak the casting difficulty of the spells he knows – and the apprentice takes advantage of this improvement as well.

The game uses a variant on the classic IGOUGO system. Both players roll initiative and the winner may choose whether or not he wants to go first. The first player then moves his Wizard (and up to 3 hired characters within 3″). Then the opponent moves his wizard. Then the first players moves his Wizard Apprentice and up to 3 characters within 3″ of the apprentice – opponent then does the same. This is followed by both players activating any remaining “soldiers” (hired characters) , and finally all creatures belonging to players and those that are part of the scenario. Breaking up the activation each turn among the two warbands this way is enough to not have one player steamroll his opponent.

Combat and magic uses a single D20 (twenty sided dice) and opposed rolls. In combat the player who rolls the highest wins the combat, and deals the total of what he rolled as damage to his opponent. The opponent uses his armor value to reduce the damage dealt. This way combat can sometimes be brutal with a single killing blow, or an ongoing fight lasting a couple of turns where characters are worn down. It’s a simple and very fast system that combined with the unit activation and unit actions keep the game fast paced. I can’t say that I am blown away with the combat mechanics, but they serve their purpose. The main attraction is the magic and the spells thrown around by the wizards the apprentices. The magic adds flavor and a lot of fun and is the main reason my interest in the game increased and stuck after the two games played so far.

As with many other skirmish based games Frostgrave want to get gamers to play a campaign. The campaign is a bit different from similar games in that only your wizard improves in between games. Your wizard gains experience for successfully cast spells, for taking out enemy models and for a couple other scenario related tasks. For every 100 experience points gained the Wizard gains 1 improvement point. Points can be used to increase the wizard stat line, learn new spells and decrease the casting difficulty of already known spells. Models who are eliminated in a scenario have to roll on a injury chart, the wizard and apprentice can get lingering effects or die while everyone else either stays healthy/misses next game/gets killed.

Players may opt to have a final goal with the campaign, in that your wizard learns all the spells of his own school – or you can just keep playing for fun with no end goal.  There are 10 scenarios included in the core rulebook – unfortunately imo they are mostly “specialized” with a unique goal such plundering a museum with living statues or scenarios that require specific terrain types/indoor locations/special models. Few of the scenarios are “generic” enough to warrant too much replay value, hopefully more generic scenarios are added in the expansion. I can think of a couple of scenarios right of the bat such as “assassination” of the enemy wizard or apprentice, protecting a piece of terrain from the opposing warband and escorting a character across the table. If you have other skirmish based games in your collection, I am sure you will be able to come up with a lot of your own scenarios.

What adds to the scenarios however is the option to have “random encounters”, you have a list of creatures and roll on that list every time a treasure is picked up. This way you can have wondering trolls, or roaming undead enter the table and shake things up. There are 25 different creature profiles that you can have great fun with and which add danger and unpredictable elements to your scenarios.
Another things that I really like, and which I have not seen in any other skirmish game that I’ve come into contact with is the ability for your gang to have a “home base”. The home base is picked after the first game in your campaign, and lend a fixed bonus feature for your gang. For instance you can make yourself at home at an abandoned Inn which allows you to increase your warband to a total of 11 instead of the maximum amount of 10. You can be based in an old library and get the chance to find grimoire and learn new spells. Be based in a  crypt to have an easier time summoning zombies and so on. Furthermore you can improve the home base with a bunch of gadgets and equipment, such as dog kennels, summoning circles and brewing pots. This is truly a great idea and makes you spend money not only on replacing hired goons but on long term improvements for your gang.

Now despite my mainly favorable opinion of Frostgrave I do see a few potential problems – some of which have already been brought up in other reviews. But my worries are mainly that there is no balancing mechanism for warbands of different strength/level. This could mean that a very successful warband get hard to beat if you are down on your luck. In games like Empire of the Dead underdog warbands are compensated with more reward money if they win a scenario. But in Frostgrave there is no such mechanism. My other main worry is the total focus on “treasure hunting” in the scenarios. The main objective in the game is to rush onto the table and grab treasure tokens, then haul them off table and cash in. This I predict, will become tedious in the long run. More scenarios need to reduce the number of treasure tokens and focus on the experience/leveling aspect instead imo. And finally some critique against the layout of some rules that I found to be spread out over several chapters. Such as preparing scenarios, deployment ranges etc are not concentrated in one chapter as I would have liked it. This can be frustrating when you try to find something mid game. This game needs a crib sheet with all the basic information!

Final thoughts? Frostgrave is very easy to get into. The model count is capped at 1 wizard, 1 apprentice and normally 8 hired goons per warband. And even though the warbands in the book are “human” and the stats have no racial traits for fantasy races – it does not prevent you to field say an Orc of Elf warband using the same character profiles. The rules are simple and play fast., not necessarily “beer and pretzels” light but definitely on the lower end of the complexity spectrum. This may be a good game for introducing someone into wargaming. Magic is the needed twist and is the main attraction of the game. If you want a game based around spellcasters in a campaign setting this is the game for you.