Mothership: Tabletop Combat is a 2-6 player sci-fi board game. Lead your fleet into battle. Conquer planets. Research technology. Ensure the survival of your colony.

Mothership takes the best elements from dice combat games and blends this into an easy to pick up, unpredictable and enjoyable gaming experience. It’s light-hearted, engaging and the most fun you will have had rolling dice in ages!
Mothership is a tabletop dice combat game for 2 to 6 people. Players take turns moving ships, attacking other players, capturing planets and managing an economy.
Your fleet is composed of three unique ship types, including the versatile Mothership that can modify its weapons, shields and engines on the fly.
All players start with the same fleet of ships on a balanced board that changes every time you play. Battles occur between ships using dice and players must protect their own base while attacking their enemy’s base.
To get the edge over their opponents, players must capture planets and spend resources on upgrading a technology tree. The technology tree complements certain strategies and there is no bad choice. It all depends on out-smarting your enemy.

Some behind the scenes info From the designer; 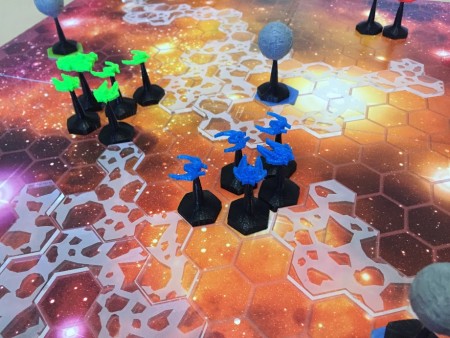