After tons of online hype and some waiting, it arrived in my mailbox last Tuesday .. and then the wait ’til the weekend and game day started! SCYTHE!

Created by lead designer Jamey Stegmaier with the assistance of Morten Monrad Pedersen (solo variant) in the stark but beautiful world of artist Jakub Rozalski, Scythe successfully funded by Stonemaier Games through Kickstarter in October/November, 2015 and is set to be released to retail in September 2016. This review is based on the base Kickstarter pledge level that is currently shipping worldwide.

It is a time of unrest in 1920’s Europa. The ashes from the first great war still darken the snow. The capitalistic city-state known simply as “The Factory,” which fueled the war with heavily armored mechs, has closed its doors, drawing the attention of several nearby countries.

Scythe (1-5 players, 115 minutes) is a board game set in an alternate-history 1920s period. It is a time of farming and war, broken hearts and rusted gears, innovation and valor.

In Scythe, each player represents one of 5 different factions leaders attempting to restore their honor and lead their faction to becoming the greatest power in Eastern Europa. Players conquer territory, enlist new recruits, reap resources, gain villagers (workers), build structures, and build monstrous mechs to do battle with the other factions.

For reference, we played a 3 player game. Next up will be 4-5 players and then the solo-variant Autonoma rules, which should prove very interesting indeed.

Each player begins the game with a completely different amount of resources available to them (strength, victory points, movement capabilities, and popularity), several faction-specific abilities that must be unlocked, and a secret objective or two. Starting positions are pre-set on the board based on each factions specific benefits and weaknesses.

Setup looks insanely confusing, but once you’ve done it everything starts to make sense. All you need to know really is laid out in front of you on your Player Mat, Action Selection Board and any other cards you have, mostly in Icon form. Once you have figured out the icons and what they all mean the rest becomes fairly easy to understand. 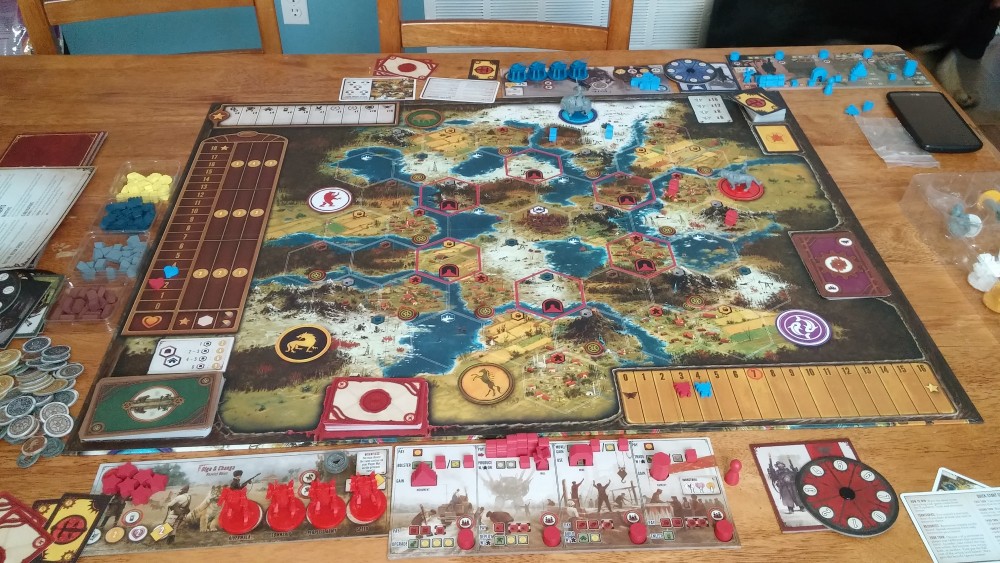 The rules even tell you not to teach new players every little rule (as it can become overwhelming) but rather give them the basics on the quick start guide (every game should come with a quick start sheet!) and dive right in to figure the game out. I find this the best way to learn a game myself, and that’s exactly how we did it here; Set-up, A quick overview of the rules, and then start playing – anything that needed to be looked up afterwards was looked up as needed, and it worked! Sure, had we known exactly how combat works and affects things or how the Factory cards work right away some things may have been played differently but overall it only created small moments of “Oh no! Damn, I wouldn’t have done that .. oh well, next time!”

Except for the players secret objectives (which are randomly dealt) the only elements of luck are the encounter cards that players draw as they come across various territories and combat cards that give you a single-use boost in combat. Combat is also driven by choices, not luck. 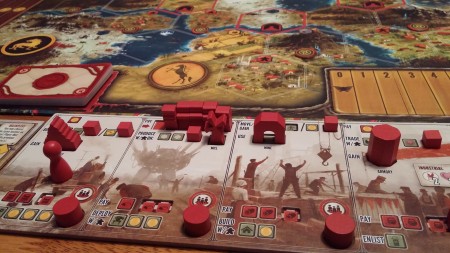 Scythe uses an action-selection mechanism to keep game play moving and reduce downtime. Players can upgrade actions to become more efficient, build structures that improve their position on the map, enlist “recruits” to enhance character abilities, activate mechs to deter opponents from invading, and expand their borders to reap greater types and quantities of resources. These engine-building aspects create a sense of momentum and progress throughout the game.

The order in which players improve their engine adds to the unique feel of each game, even when playing one faction multiple times as you can try out different strategies in every game. Except with the use of the Rusviet Union’s special ability you cannot select the same set of actions two turns in a row which means you have to plan ahead and play smart in order to succeed. If none of the available choices can be used, you can select an action that you know you won’t be taking next turn and simply not do anything.

Each section of the Action Selection board has a “top row” and “bottom row” action. You can, if possible, take both actions (in any order), one of the two actions, or no actions at all. As long as you don’t select the same box twice (That’s what the pawn is for – you place it on the section you wish to perform, so you know you cannot select that one next turn).

Each factions action selection board is laid out differently as well and has different costs/bonuses associated with your choices. This must have been one hell of a balancing act to create but it works! I did not find any faction to be any more powerful (or weak) than any other during play.

When you reach the Factory in the center of the board, you select a Factory Card from the pile (which consists of 1 card per player +1). These cards provide you with a 5th set of actions, essentially extending your action selection board by one more slot for the rest of the game. This can be a great bonus if you get a good card, but if your selections are slim it may not do you any good.

While there is direct conflict, there is no player elimination, nor can units be killed or destroyed. Instead, when two players meet in combat the winner takes over the contested territory and any resources that were available on that territory, but loses popularity, and must have spent some of their combat ability in order to defeat their opponent as well. The defeated player retreats to their home base and earns additional combat cards for later use. To determine combat, each player has a dial with the numbers 0-7 on it. You select an amount of POWER you want to spend (indicated by your power token on a power track on the game board, and yes, you can select to spend nothing in combat .. but you probably won’t win) and add a number of combat cards (1 per player piece involved in the combat), in secret. When both players are done, you reveal your dial and combat cards and the player with the higher number wins. Drop your power level down by the number selected, discard your combat cards and you’re done. Ties go to the attacker. Simple. Fast. When you want to attack, however, is another topic altogether. Attacking is a strategic choice. You don’t eliminate the other player or destroy his pieces, so you must choose to attack for other strategic reasons such as taking resources, taking territories and completing your secret objective.

Beautiful. Well made. Plentiful. Those are the three words that best describe the components included in Scythe.

Every single component looks fantastic, from the cards, to the player boards to the workers and miniatures. The artwork, the sculpts, the materials used everything is of the highest quality, even in the base game (the upgraded components are even nicer, if that’s possible, by looking more realistic). The ONLY issue we had was with the symbols and colors on the game board itself. The symbols could have stood out a little more if perhaps the rest of the board was slightly more muted and the territory types (mountains, plains, etc) could have been slightly better represented (we figured it out easily enough, but there was some confusion at first).

Scythe is a keeper.

It’s a beautiful game, it’s well balanced, well thought out, LOOKS intimidating but, despite it’s depth of strategy is really quite simple to pick up and play. If you’re looking for a deep strategic, intuitive, action selection game that has multiple ways of winning and is remarkably easy to learn, this is absolutely one to take a closer look at.

How to Play (4/5) – Incredibly detailed with loads of examples and pictures to show you what it’s talking about, the rulebook is a thing of beauty, but at 32 pages it’s insanely large. The page count is the only drawback with the rules for Scythe as it feels much more daunting than it actually is.

Roleplaying Experience (3/5) – There is a deep story behind Scythe, set in 1920’s Europa with a number of disparate factions working against one another to become the most powerful in the land. One thing that seems to be missing is the importance of The Factory, which is said to be the major centerpiece but lacks any major desire to get there.

Fun (4/5) – Almost no downtime, especially at the start of the game, quite balanced throughout the different factions and the stakes are raised immensely nearing the end. Once those stars start hitting the board they come fast and furious .. and before you know it the game is over! A 2 hour play-time was a little long for our test group, but it was still a good time for all involved, even those who don’t typically go for longer, strategy based games.

Game Night (1/5) – With a 2 hour play time (not including setup), you’re unlikely to get in multiple games in a night, but it is possible.

Shelf Life (3/5) – I feel this game will definitely see table time but, again, with it’s play time and complexity it’s not going to be the go-to game for many groups.

Quality Components (2 points) – This game is beautiful in every aspect. From the amazingly high quality artwork on the cards to the custom components and the beautiful miniatures it’s absolutely gorgeous to look at.