The perfect entry into the Star Wars roleplaying experience for players of all skill levels, The Force Awakens Beginner Game introduces a complete, learn-as-you-go adventure that carries you from the sands of Jakku deep into the heart of a mystery that could change the course of the galaxy.

When you’re given the chance to fight the spead of evil, will you take it? Or will you flee? What will you do?

That’s the question that’s at the heart of any roleplaying game: “What will you do?”

When you sit down to play The Force Awakens Beginner Game, you become one of four characters from the Star Warsuniverse. You might become an alien like Durm Borno the Abednedo Colonist. Or you might remain human, like Fira Bon the Soldier, Tiras Or’un the Explorer, or Mhar’li the Ace pilot. Whichever character you become, you will find all the information you need to assume that character’s identity in his or her character portfolio. 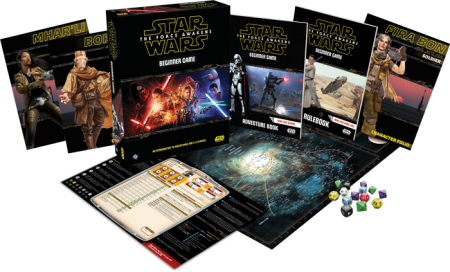