The game features a board of Europe, with shorter routes and new whimsical illustrations in every cities. With this simpler version of Ticket to Ride, younger players and beginners alike can take their first steps in the train game series.

Although rules are simplified and game objectives made easier, the game remains faithful to what has made Ticket to Ride a success: players race to complete their tickets by capturing routes on the board. The imaginative art on the board and on the ticket cards makes it easy to find cities for even the youngest players, who will be delighted to build their own networks with the big plastic train pieces included in the game.

Ticket to Ride First Journey is a stand-alone game for 2 to 4 players ages 6 and older, which takes approximately 15-30 minutes to play. It includes 1 Map of Europe, 80 Custom Plastic Trains (20 per player), 72 Train Cards, 32 Ticket Cards, 4 “East-to-West” Bonus Cards and 1 Golden Ticket. Ticket to Ride First Journey is expected to be available throughout Europe in March/April at a retail price of €30. 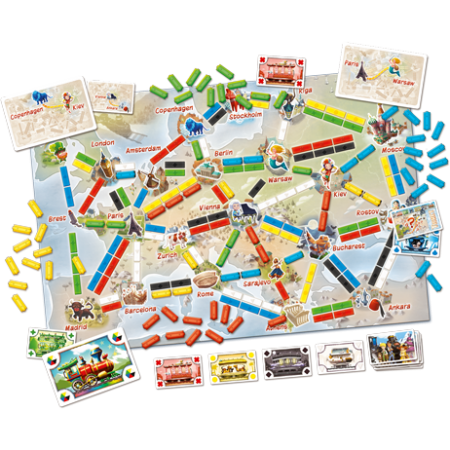