It’s the game every mutant has been waiting for! Join the X-Men on a thrilling adventure to defend mankind from
renegade mutants. MUNCHKIN: X-Men Edition combines Marvel’s beloved collection of X-Men comics with the
role-playing fun of Munchkin. Players take on the role of students attending Xavier’s School for Gifted Youngsters
and team up with Professor X, Wolverine, and more super-charged mutants to take down the likes of Sabretooth,
Juggernaut, and the almighty Magneto. The game will include 128 Door and Treasure cards, four player Role cards,
four level trackers, game rules, and a custom die.
In Munchkin: X-Men Edition, players take on the role of young mutants enrolled at Xavier’s School of Gifted Youngsters, starting at Level 1, and work their way up to Level 10 to graduate at the head of their class. Players gain levels by defeating iconic Marvel villains, recruiting Allies such as Wolverine, declaring an X-Affiliation, and using special Powers and Items like Silver Samurai’s Katana. 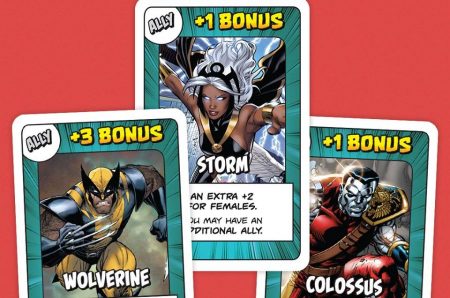