My friend Thomas bought the Kingdom Death monster v.1 with the previous Kickstarter and came by a couple of weeks ago to show off the game and we played a partial campaign spanning “4 lantern years” which was enough to play the introduction scenario, 2 hunts and have a faceoff with the first boss “The Butcher”.

I didn’t really know much about the play mechanics having read just a little in advance and what I found was a mixed bag of thoughts and impressions. This post will be kind of a review/battle report merged into one.

Kingdom Death Monster is a campaign driven board game that combines character development, base building, research and tactical combat into one game. The setting is some kind of nightmarish reality where people wake up in a world of darkness, with no language, culture, knowledge or anything to keep them together – in your case a group of people wake up and are attacked by a large creature looking like a lion.

The game starts with a desperate attempt of survival where 4 humans attempt to fight and kill an attacking beast. Those that survive this first encounter bond together and form a small tribe of sorts, and the backbone of your civilization is born. After the first victory a small settlement is formed and players have to decide how to use materials foraged from the carcass of dead monsters (sometimes also fallen humans) to craft buildings, tools and weapons. Each “year” in the game sees further development of your civilization, as they learn about life and death, language, music, sculpting, weapon crafting see your settlement grow as more buildings are constructed and new humans are born. 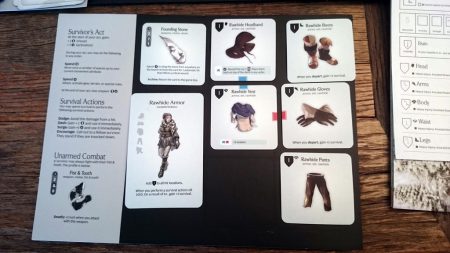 A “lantern year” as the game calls it, is broken into a couple of phases, but each year includes a hunting for monsters phase, character development phase and settlement development phase. There is an ultimate ending, which I think is 20-25 lantern years. Over that time you will die with lots of people in combat, but others will also grow old and not be able to go out on any more hunts. As such you will be raising and training new hunters over the campaign and probably never have characters that are experts in everything.  Though people are replaced on a regular basis, you could take comfort in knowing that items, buildings and your civilization remains intact for most of your campaign.

Over the course of the campaign you will also have to decide between different choices your civilization will make. How will you handle the death of fellow humans? How will you be raising children. In our playthrough we opted for “cannibalism” of the dead and raising new children with rigorous training Sparta style, which in turn affected the gameplay of how new characters developed.

The base/civilization building parts of the game are well made and thought out, I don’t think I had anything negative to remark to this part of the game.

With civilization building being one big part of the game, another big and central part is the hunting phase. The hunts always include 1 monster and 4 human hunters (at least as long as you have that many able bodied people left in your settlement). As the game progresses more monster types will unlock and the range of monsters to pick from for your hunts will increase. Initially only the “white lion” monster type is available.

A hunt begins with picking hunters, then picking the prey – which leads you to a hunting board sequence with random encounters and the possibility of either you or the monster falling into an ambush. Each monster has its own AI decks that determine personality traits, attacks, movement patterns and even though we only managed to play against the White Lion, Screaming Antelope and the Butcher I can say that all of them offer completely different experience, tactics and challenges for the hunters to overcome.

Monsters activate, move and attack – and their wounds are also determined by – a stack of AI cards that you draft when you find the monster. There will always be a number of set standard AI cards combined with a number of random cards so you will not be able to tell how this particular monster of a certain type will act until you’ve played through all cards at least once. The number of AI cards determine the number of wounds, the higher level a monster the more cards. As wounds are inflicted face down AI cards from the stack are removed, when the monster has no cards left and a final wound is dealt you kill it. Sometimes a brutal critical hit in the right place can kill a monster  faster but that is rare. 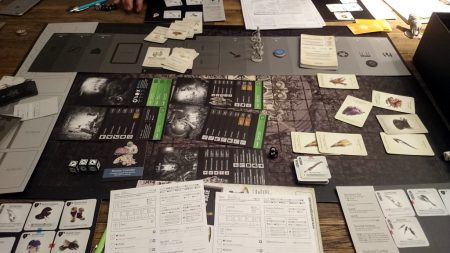 Combat uses a mix of D10 dice and custom body location dice. Character strength and weapons add the result of D10 to hit and to wound monsters. A successful hit draws a “hit location card” (specific for your current monster) and you have to roll again against the monster toughness with your weapon to see if you cause a wound. Rolling a 10 often results in a critical hit which causes secondary damage and reactions from the monster that can be in favor of the hunters or enrage the monster further. When the monster attacks it too rolls D10 dice to hit the hunters, but instead of drawing hit location cards you allocate damage using the “body location” custom dice.

Each part of the body has a number of wounds, when you exceed that number you get critical hits and you get reduced combat ability and permanent injuries, you can also bleed to death. Armor can increase the number of wounds per body part.

Combat itself alternates between the monster and all the humans, monster activates by cards while humans have two actions each for movement, combat and special abilities. Combat takes place on a large grid, there is little terrain in each encounter which can give a dull impression and much of the combat revolves around maneuvering into optimal position to strike monsters from the rear to increase your hit chance. After a couple of hunts you will have developed some kind of ranged weapons that increase your tactical options, equipped a human or two in full armor to create a damage soaking “tank” and maybe some other humans have become specialists in certain combat styles/weapon proficiencies.

The first combat of the game is not that exciting, but once you start producing equipment it opens up some player management as well as tactical option to deepen the experience above move-hit-repeat. Oftentimes monsters react to hits and wounds in such a way as to not stand still and letting themselves be swarmed which is a big difference from most skirmish games where you clash and whack each other until one of you is dead. I liked the progression of equipment and tactical abilities, it was slowly increasing during our game against the initial White Lion, a second White Lion and the Screaming Antelope. Our little gang was doing OK even if some took a beating or got killed.

After 3 games our settlement started taking shape and so did our fighters. You could start feeling a bit comfortable with your abilities. I guess that is why the game throws in the bosses, in our case the first boss the game unleashes is the Butcher. A humanoid clad in thick armor, wielding two axes and who flays human faces as a hobby. This is handled as a different type of “hunt”, since the monster visits your settlement instead of being sought out.

We got such a trashing from this monster, all of our most experienced hunters got massacred and the Butcher made off with some materials from our camp. The game was not over, but it had shattered the impression that you were prepared for anything lurking out in the endless darkness. On one hand I like the idea, but on the other it was a similar experience as you have in roleplaying games with level 1 characters going against a level 20 dragon or something. We managed to inflict minimum amount of damage despite decent equipment and tactics, and were beaten so badly that I questioned the difficulty of the monster. Perhaps a more dramatic take would have been to have the monster beat up a certain number of people and take them with him for later rescue (or finding their remains in a later encounter) instead of murdering everyone with little effort.

The game had felt pretty balanced up to this point and left something of a bitter aftertaste. Fortunately all the equipment and your settlement including the remaining people remain and you can continue the campaign.

Overall I quite enjoyed the game. I have some understanding when some people on forums say that “this is the only boardgame I will ever need from now on”, as it does include a variety of game elements to it and combines them rather well. The model sprues from what I have seen are very fiddly and perhaps unnecessarily so for some models, though overall the minis (in particular monsters) are very nice. The boxed game lacks terrain, and instead provides you only with cardboard pieces to place on the board. Considering the amount of models you got in the base game I would have expected it to include some plastic terrain as well – it is not as if you require more than 4-5 pieces of terrain in each fight anyway so it would have been possible.

As the game is pretty much Kickstarter exclusive unless you are insane enough to buy it off some greedy douchebag selling it 2nd hand with a 400% profit on Ebay it will probably never be included in my collection. I would have bought it, but not for 100+ dollars for a base game. The version 1.5 Kickstarter also increased the cost of the base game to something like 250 dollars. And to be honest, while the game is good – it is not worth 250 dollars. The components are a mixed back, minis ranging from decent to great, the terrain only being cardboard pieces and the design of cards and their not being that exciting. The rulebook will probably wear and tear a lot if you have the softcover version 1.0 book, which is remedied in version 1.5 with hardback. The rules while good are weirdly written in places and half of the rulebook is a comic book style thing that I would have preferred being optional. That does not mean that the introduction to the game is bad, that part of the rules that describe the initial story and teaches you the basics is well put together.

But for 250 dollars? I don’t think so. A good enough game if you were lucky and patient enough to get it through the first Kickstarter, but overhyped and inflated cost if you bought into it through the second Kickstarter or think about buying it second hand.

I would score the game 8/10 for what it is, there is replayability and there are expansions, but availability and cost kills any attempt to give it a higher score. Would I like to play it again? Yes.