The sixty new cards (three copies each of twenty unique cards) in Earth’s Scion explore the complicated relationship between Earth and Mars in Android: Netrunner. But no matter what the lawyers and philosophers say about the legacy of Mars’s exploration, one thing remains certain—the conflict between Runners and Corps will never end.

A philosophical question lurks beneath the myriad conflicts on Mars: What does Mars owe the Earth? For some, this question has an easy answer: Mars was settled by colonists from the Earth. It imports most of its technology and resources from the Earth. Even the names of its largest cities, nodes, and starports are indebted to the authors and scientists on Earth who dared to imagine life on the Red Planet.

But, the Martian Clans argue that their ancestors took the real risks involved in settling on a cold, lifeless world. They built the first domes, found the first ice fields below ground, and planted the first real crops on Mars. They suffered and died so that their decedents could live free—not so they could live in fear of Warroids run amuck across an unregulated R&D lab the size of a planet.

And yet it seems like the corporations that funded Earth’s war against Martian independence successfully purchased the rights to pursue their agendas with impunity all across the planet’s surface. So, while Haas-Bioroid develops new Bioroids capable of taking human life without human oversight and Jinteki maintains its stranglehold over Martian agriculture, NBN is reforming education to promote greater compliance while the Weyland Consortium is laying the groundwork for a new Martian Beanstalk. 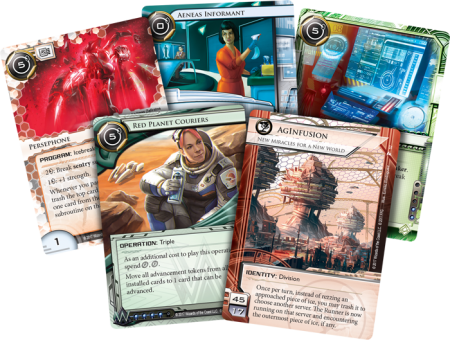