Written by Anatoli on April 12th, 2017 at Anatoli’s Game Room

If you like movies like the Prestige and the Illusionist the theme of this boardgame should appeal to you!

Caroline had eyed this game for some time before picking we decided to buy it. There was not that much information on the internet about the game either so it was a bit of a gamble, but it turned out to be a good game.

Trickerion is a 2-4 player, worker placement and resource management game with a rather unusual theme of players taking on the role as competing magicians/illusionists.

Originally funded by a Kickstarter it is now available in regular retail. The box includes both a regular game variant as well as an expansion with parts and rules included for those that want to add more advanced rules to the base game. So far we have only played the base game so my review will not touch upon the advanced rules of “Dark Alley”. Suffice to say that the advanced game mode adds more tricks, longer gameplay, new theater venues and a new area on the map where players may play out actions and gather resources.

In Trickerion players take on the role of magicians/illusionists competing for fame by displaying their tricks at the town theater. The game takes part on both the main city board where players run adverts for their shows, get money from the bank, hire workers and assistants and buy parts for their tricks. In the city you will also find the theater where players will perform with their tricks.

The other part of the game takes place on the player sideboard, where your magician has his workshop where tricks are prepared and where you decide how to divide your labor force between various actions for the upcoming turn. 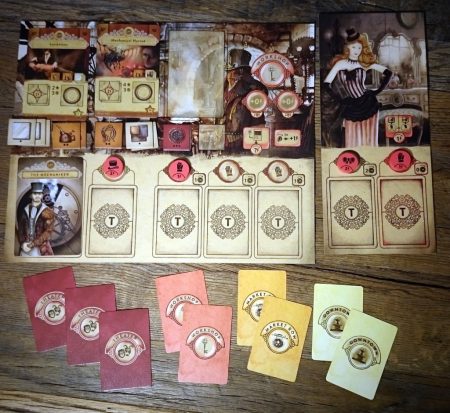 At the start of each turn players place activation cards with locations printed on them face down beneath each member of their troupe. Activation cards are then flipped face up at the same time, and the player with the least amount of fame starts the turn by allocating his first character to a space on the board. Players take turns placing one character each until all characters have been placed.

An interesting part about the characters is that they have various number of actions printed on them. The magician has 3 actions, specialists have 2 and regular workers have 1. Many spaces on the board require multiple actions to be used, but some spaces add additional actions to whatever character is placed there

All players begin the game with the knowledge of one trick belonging to their school of magic, additional tricks can be learned as the game progresses. Players are allowed to both learn tricks from their own as well as competing schools. Each trick, depending on its complexity level, yearns various amount of money and fame as well as “trickerion stones”.

Fame is used to both win the game, but also to unlock more complex tricks for your repertoire. Money is used to purchase parts and materials, hire assistants and workers as well as for paying them at the end of each turn. Trickerion stones is a special resource that can be traded for additional actions on a 1-1 basis (except for when taking actions in the theater).

As I have mentioned the magician has the most number of actions per turn, and is the most valuable member of your troupe both in terms on how much he can do on the various spaces on the boards, the amount of preparation steps he can take to setting up tricks in the theater – but he is of course also the only one in your troupe that can perform them. The other members of your troupe are the regular workers that are straight forward in their use with only a single action. But you also have specialists from 3 different categories, and players start out with 1 and can gather more during play. The specialists are the Manager, the Engineer and the Assistant.

They all have their own special abilities. The manager allows you to store more items in your workshop and gives you free extra parts for two material categories in your storehouse. The manager also boosts your income if involved in the exhibition in the theater.

The engineer allows your magician to learn a 4th trick and to receive a trickerion stone after each performance in the theater.

The assistant comes with both the assistant and an extra worker from the start, boosting the number of actions you can take. The assistant also increases the amount of fame you earn during each performance.

Trickerion would be quite straight forward if players only manufactured tricks and played them at the theater without interaction. The game fortunately has some clever design choices here to encourage player interaction and temporary support of another magician. Each turn players are allowed to prepare tricks for shows during the week. At the most you will have 5 theater cards open and running at the same time.

The theater slots move one space to the right each turn, and after the 5th space the theater is discarded and another theater card is added in the first space on the track. This allows players to prepare tricks on multiple theater cards – this is necessary as you will have components for several tricks of the same type but you cannot perform the same trick more than once on each theater card.

Instead you have to plan your performances, spread out your tricks and create a show of linked tricks together with other players. Players that manage to thematically link their tricks with those of their opponent score additional fame for creating a show with good transitions.

At the same time, only one magician is allowed to be the “main attraction” on each theater card. The magician who initiated the show, regardless of whether he has the most or just a single trick on the card becomes the main attraction and scores fame points for the trick he displays – and the bonus points/resources for his characters running things behind the scenes – and bonus points/resources from the theater card. All other magicians that have tricks on the theater card currently performed are not left without nothing, but score points for all the tricks they have prepared on that card as well.

This leads us to the important part of performing a show, picking a weekday on which to perform. The theater space has spaces for performances staged on Thursday to Sunday. Thursdays pay the least and gather the least amount of pay for your staged tricks. On the other hand, you get more time to prepare shows which translates in a bonus action for all characters placed on the Thursday slot and you can thus add more tricks to the theater cards. You are also the person who picks which theater card is to be played first, you can as such screw other magicians by playing their well prepared show on a Thursday night that results in them getting less pay and fame for their high end tricks!

The opposite of a Thursday night is the Sunday slot. Sundays give players the least amount of time to prepare their show, but they get the best paying audience. The risk of performing on Sundays is of course that you perform last and you can end up being the main attraction of a theater card with the least amount of your own tricks left on it.

I really like the base game, we have yet to play the advanced rules of the “dark alley” expansion that you get in the box so I can’t say how much it alters the game. But from what I’ve seen it adds more high end tricks and prolongs the game with additional number of turns and also features a third theater card deck for the end game stages. 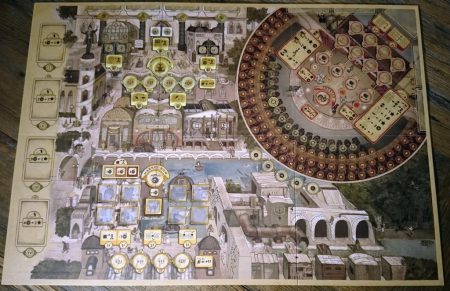 We’ve played it several times and I tried different approaches each time to see if you could steamroll the opponent somehow but was pleasantly surprised that there were a number of balancing features and realities to how the game is designed that prevents you from making “alpha strikes”. Building a big force of labor early drains you of money, spending all your time on level 1 tricks is only good for a short while before you start to lag behind, focusing solely on high end tricks is impossible from the start as you need to unlock them with fame which requires performing low end tricks. Also, sole focus on high end tricks has  you perform less amount of tricks each week and can damage the way you receive money and fame. How players aid and kill each other’s performances by picking shows on certain weekdays is also a very important part of planning your turn.

In other words, a great game if you are into worker placement games that require planning and resource management. Having a unique theme is a bonus.