In the far reaches of space, the aliens of the cosmos vie for control of the universe. Alliances are constantly forged and broken in the pursuit of power as starships journey from planet to planet, ready to build colonies and battle foreign powers, ensuring the survival of their people as they spread throughout the stars.

Fantasy Flight Games is proud to announce the upcoming release of Cosmic Encounter 42nd Anniversary Edition in the third quarter of 2018!

Now is the perfect time to return to Cosmic Encounter or to experience the classic game of intergalactic colonization for the first time. Cosmic Encounter 42nd Anniversary Edition will become the new standardized version of the game when it hits shelves in the third quarter of 2018, and it remains compatible with all existing Cosmic Encounter expansions.

Cosmic Encounter 42nd Anniversary Edition welcomes new players to the game of infinite possibilities with a freshly revised rulebook and a beautifully illustrated Quick-start Guide that captures the nostalgia of the original game and makes it easy for anyone to learn. The Quick-start Guide’s comic book style throws readers back to the 1970s, providing vital insight into the core rules of the game while embracing the fun of a cosmic conquest filled with wacky aliens and outrageous abilities. What’s more, with the beautiful translucent ship pieces , spreading your colonies across the galaxy has never been more stylish!

Cosmic Encounter 42nd Anniversary Edition offers you new ways to customize your games with the introduction of Cosmic Combo cards. These carefully assembled cards offer a list of alien species with a brief description of their powers to create themed matchups and explore different types of games. You may find yourself among some  Big Time Clubbers or Cellar Dwellers,  that can be integrated into three, four, or five-player games. Every card spins a new challenge, and with these new options for customization, no two games are ever the same. 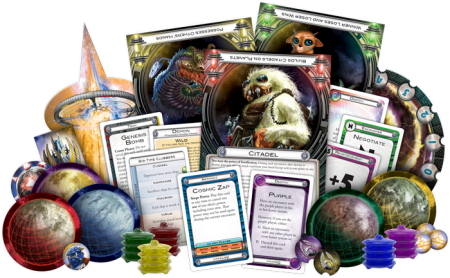