Fantasy Flight Games is proud to announce A Game of Thrones Catan: Brotherhood of the Watch 5-6 Player Extension, now available for pre-order!

Jeor Mormont continues to seek a successor from among the Brothers of the Night’s Watch. Only one who can improve the failing infrastructure of the Gift and restore the guards who defend the Wall will be able to take the reins and lead the Order through the coming winter. But the struggle for power among the brothers becomes more difficult with each passing day. The forests of the North conceal many mysteries, and the wildlings still have a few tricks up their sleeves. Brutish beasts clamor towards the Wall, and if you wish to uphold your vows to defend the realms of men, you will need to call upon new allies and use every ounce of your cunning to outwit your enemies beyond the Wall and within the Watch.

One year ago, you entered the harsh northern reaches of Westeros with A Game of Thrones Catan: Brotherhood of the Watch.

Combining the classic game play of Catan with new mechanics and immersive elements, players stepped into the roles of brothers of the Night’s Watch, tasked with developing the Gift and recruiting guards to defend the Wall—all with the goal of ultimately becoming the new Lord Commander.

Now, A Game of Thrones Catan: Brotherhood of the Watch 5-6 Player Extension increases the challenge of the competition by allowing you to bring up to two additional players to the fight for power. 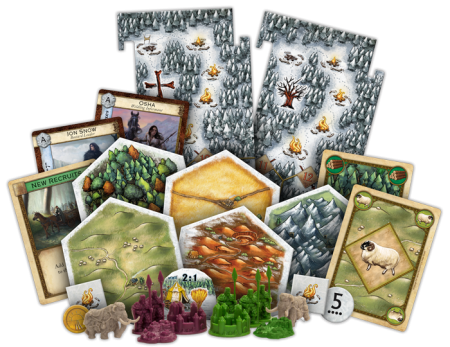