In Daznak’s Pit, the fifth Chapter Pack in the Dance of Shadows cycle for A Game of Thrones: The Card Game, is on sale now at your local retailer or from Fantasy Flight Games!

As winter descends on Westeros, the players in the game of thrones find they must continually make compromises in order to survive. At the Wall, Jon Snow seeks solutions that will satisfy his own conscience, protecting the wildlings even if it means angering his brothers in the Night’s Watch. In King’s Landing, Cersei Lannister must confess her crimes before the faith and the kingdom, placing herself at their mercy even as she plots their destruction. And in Meereen, Daenerys Targaryen bends on her own morals and permits the reopening of the fighting pits to keep her people from being slaughtered. But with each of these choices, characters change until they are barely a shadow of their former selves. Now, each must decide where they draw the line—what piece of themselves are they unwilling to sacrifice, even if it means losing everything else.

The long summer is over. Now is the time when all shall reap what they have sowed as they look to the frigid winter ahead. Have you laid your plans carefully? Spring your traps, ensnare your enemies, and show all of Westeros the true meaning of power! 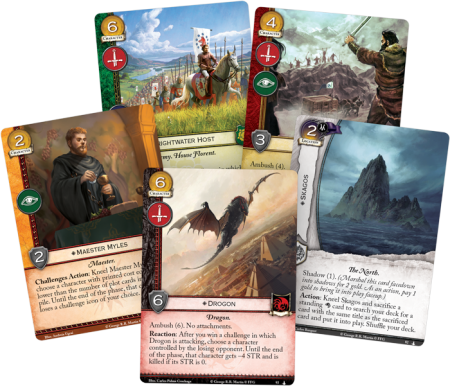