You may have escaped your battle with the Cold-drake with your lives, but scarcely had the beast been slain than word of an even greater threat reached your ears. A terrible Dragon roosts in the Orcish stronghold of Gundabad and your only way in is a fiendish Goblin you have taken prisoner. Now, you have no choice but to place your trust in him and set off on an uncertain path through Wilderland.

Roam Across Rhovanion, the second Adventure Pack in the Ered Mithrin cycle for The Lord of the Rings: The Card Game, is now available from Fantasy Flight Games!

Your battle with the Cold-drake in The Withered Heath has earned your company of heroes an unexpected reward: the Goblin Urdug is now your prisoner, and he claims to know of a hidden entrance into Gundabad that would make entering the fortress all the easier. Despite being your captive, however, Urdug will not part with this precious information easily. Only after you’ve helped him recover three things he lost in the craggy ravines and grey moorland of Wilderland will he lead you to Gundabad.

With Rhovanion spread out before you, the fate of your quest lies in the hands of a treacherous Goblin. The question might not be if he will betray you, but when. Still, you have no choice but to follow where he leads. Stay on your guard and head off into the wild! 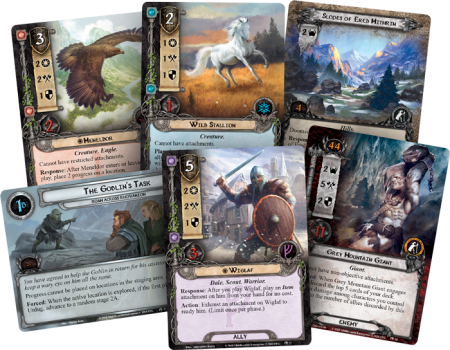