WizKids has released the 4th Edition print of the classic hidden movement vampire hunt board game, Fury of Draclua!

It is 1898. London has returned to peace for eight years following Count Dracula’s thwarted plans, or so they thought…

In Fury of Dracula, one player is Count Dracula secretly traveling the European countries, turning humans into vampires with his gruesome bite, and laying deadly traps for those hunting him. The Count’s opponents are the Hunters who must find the bloodthirsty villain and destroy him before his undead thralls claim the night as their own.

Fury of Dracula 4th Edition includes the same great game play as 3rd edition with a new and improved rule book; larger, poker-sized cards; and fully painted figures for Dracula and each of the Hunters. This updated and improved version of this thematic classic is a perfect addition to any board gamer’s shelf!

Each round is broken into two phases: day and night. During both phases, hunters may perform one of many actions such as travelling throughout the map or investigating their present location. Dracula, however, is only able to act at night, when he can lay traps for the hunters, create new servants, or secretly move to a new location. Players continue to traverse the map, featuring a variety of European countries, until either Dracula gains enough influence, or the hunters defeat him.

Will the Hunters take down Dracula before his undead thralls overwhelm Europe, or will he succeed in his insidious mission? 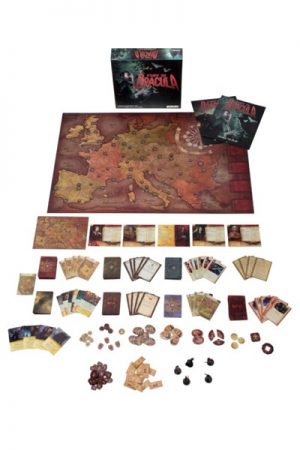