Fantasy Flight Games is proud to announce Age of Ascension, the second set of KeyForge—now available for pre-order, releasing in the second quarter of 2019!

In 2018, legendary designer Richard Garfield introduced the world to KeyForge—a game where every deck is as unique as the player who wields it, coming pre-built and ready-to-play. Wits and tactical prowess win the day in a fast-paced game of cosmic competition where death is temporary, but glory is forever.

Along with this groundbreaking design came a lush, endlessly diverse world to call home. The Crucible, an artificial planet filled with secrets known only to the Architects, acts as the perfect setting for the world’s first Unique Deck Game, as the pieces of countless worlds gather to change the landscape every day to create something new and incredible. Now, you are invited to journey deeper into Crucible as your quest to unlock the power of this planet and ascend to a new plane continues.

Become a new Archon in Age of Ascension! As a new set of KeyForge, Age of Ascension mixes up the cardpool with 204 brand-new cards, joining 166 cards first introduced in Call of the Archons to create an entirely new pool of 370 cards and billions upon billions more Unique Decks for you to discover, learn, and master. 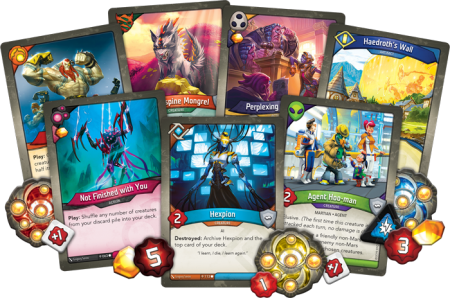