WizKids is pleased to announce that Ravnica: Inquisition, a social deduction game set in Magic: The Gathering’s most iconic plane, is now available in North American game stores!

Players become either Agents of Bolas or Gatewatch Loyalists in this 5-10 player game. The Agents of Bolas seek to remain hidden while they bring Nicol Bolas to power, while the Gatewatch Loyalists must try to root them out before they succeed. Each player will have unique, color-based powers determined by their Guild, and players will elect a leader each round who may target another player with their ability.

At the end of 5 rounds, players will be killed via various abilities as well as a vote among the remaining players. If, at the end of the game, at least two Agents of Bolas are dead, the Gatewatch Loyalists win! Otherwise, the Agents of Bolas have succeeded in their plot and claim victory. 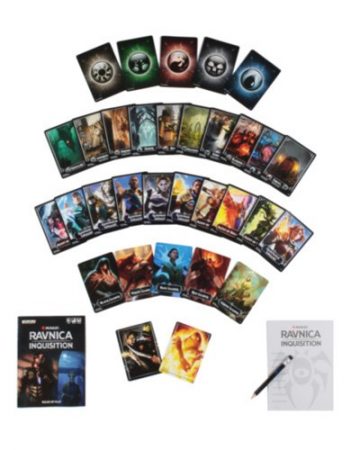 This thematic game blends elements of Magic: The Gathering with classic social deduction mechanics, creating a unique gameplay experience that will have players eager to try another round. Ravnica: Inquisition is available now, so pick it up at your Friendly Local Game Store or onlinetoday!

A social deduction game for 5-10 players, Ravnica: Inquisition is great for both fans of party games and fans of Magic: The Gathering!