Warlord Games has released four new Boromite units and some objective markers for their 28mm sci-fi miniatures game Beyond the Gates of Antares.

Tractor Mauls are carried by senior and important Boromites – practically as a badge of o?ce. Tractor mauls are practical work tools designed to extend a suspensor ?eld around an object or area and pull it away or aside. They are used for burrowing away at rock or metal, lifting heavy objects, and holding or manipulating other tools or objects.

The mighty Boromite commander leads his retinue with his lance held high! The Lectro lance is an adaptation of the lecto lash type of weapon primarily for Boromite Rock Riders fighting from their tall, silicate mounts.

The lectro lance is essentially a contained lectro energy that can be directed accurately from the back of a Lavamite Rock mount. It uses the same technology as the lectro lash but is designed to deliver a more powerful shock.

The engineers main role will be to make sure the auto workshop is functioning at its highest capacity (which is also included in this bot set!) This is a compact mobile workshop to maintain, repair and sometimes to modify all kinds of nano?based technologies including weaponry, vehicles and other machines. The workshop generates a cloud of constructive nano?drones that can set to work upon damaged or failing machinery instantly, melding with its own structural suspensor integrity drones to diagnose and repair. There are also Vorpal Charges included, more details on those below…

The mag cannon is a single?shot magnetic cannon and a very common weapon in Antarean space. The mag cannon is designed to deliver a single shot at incredible velocity and as such it is a long?barrelled weapon, often with multiple internal rails that generate a single very powerful pulse.

Create your ideal scenario or litter the battlefield with the fallen with the new Antares Objective markers! 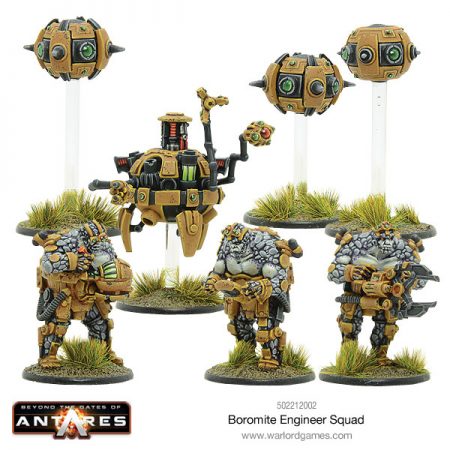 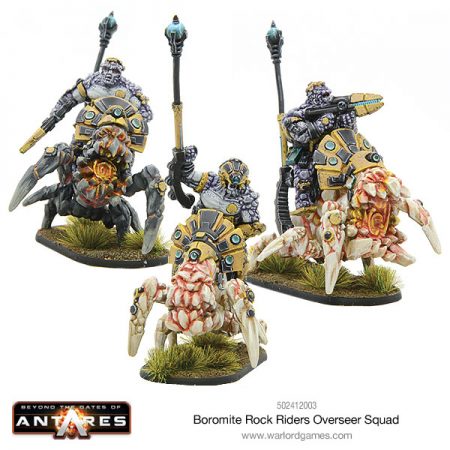 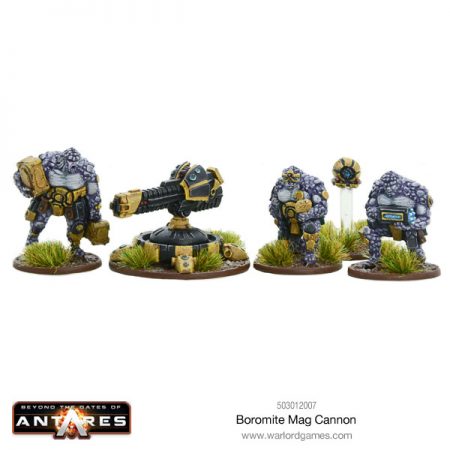 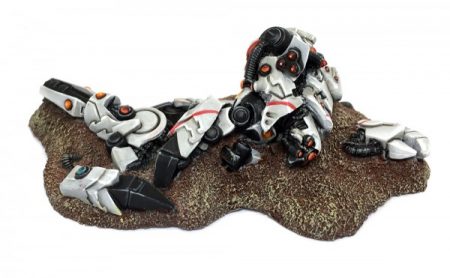 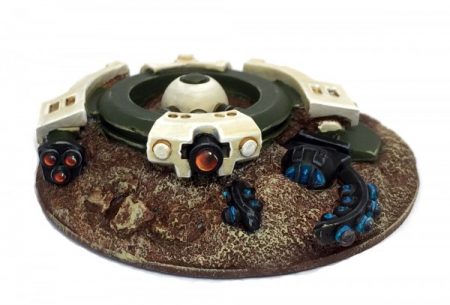 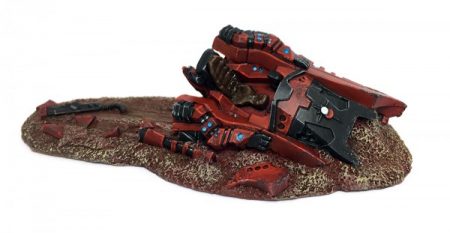 Warlord Games has introduced a new Dice Game in the Antares universe! Beyond the Gates of Antares the Dice Game is available now!

Take on the battling forces of the Concord IMTel, the symbiotic Isorians, the bio-adapted Boromites, the twisted Ghar Empire or the warlike Algoryn Prosperate to claim control of the Gates that lead to new planetary systems to trade and colonise.

With each faction bringing a unique twist to the otherwise simple rules, roll the Skirmish dice to score victories on your campaign and claim the Gate. Each player’s round represents a military offensive that will give the chance for scoring victories, but be aware of the Fate dice opponents will play against you as they can twist your results and turn a clear victory into a total failure!

Algoryn Commanders, it’s time for war… attacks flare across the Determinate, and the foes of the Prosperate grow more menacing by the day. Support is needed, and is being hurried to the front lines

Now available from Warlord Games is the 28mm scale Avenger Attack Skimmer for Beyond the Gates of Antares!

The Avenger type skimmer is a lightly built two man fighting machine designed for raids and support missions. It is modestly armed and armoured compared to larger fighting machines but is ideally designed as a strike weapon relying upon its speed to launch its attack and evade enemy retaliation. It is sometimes used in company with Intruder skimmers as part of a long-range raider force, providing additional firepower where needed.

Warlord Games releases Xan Tu, an Isorian drone commander for Beyond the Gates of Antares.

Entering the fray on Xilos via the chronophasic transport come the Isorians with a rather unique commander – Xan Tu;

In a previous and entirely organic existence, Xan Tu was a successful commander of Senatex forces whose career spanned almost two centuries and warzones from the Northern Spill to the Vorl frontiers in the Deep South. Reaching what was a natural end to a long and active life Xan Tu elected to live on in machine form – transitioning his mind into a drone body.

Transitioning as a drone was for Xan Tu a logical choice – for it would allow him to do what he had always done – to continue to lead Senatex forces wherever they were needed. As a machine he would lose much of his human personality, but his mind would gain so much more by direct association with the IMTel.

The promise of machine existence was as close to immortality as it was possible to get. Xan Tu understood that the machine which he would become would evolve ever further from the person he had once been, but that did not seem such a terrible thing. It was, he considered, certainly no worse than the perpetual erosion of purpose and disillusionment of mere human existence.

Drone Commander Xan Tu is the first drone commander introduced into the Antares game and as a transitioned human his qualities are perhaps a little different from those of a pure machine intellect. He is a weapon drone type unit as well as a command unit, and can include further Nhamak type dronestoo.

Xan Tu works out relatively cheaply compared to a regular Command Squad and this is largely down to the fact he is unarmed, while his nano probe net ability is an upgrade. By adding Nhamak drones you can change things up a level, coupled with his special leadership through the Nano Probe Net (full rules on page 117 in the supplement ‘Battle for Xilos‘) he becomes quite an asset to a larger force.

Warlord Games have announced new Boromite, Algoryn, Ghar and Freeborn Reinforcements are on the way  for Beyond the Gates of Antares 28mm sci-fi miniatures.

With the official release of the first Beyond the Gates of Antares narrative supplement, ‘The Battle for Xilos’ – the various forces involved in the struggle receive an influx of reinforcements as they prepare for planetfall…

After much outcry from the community, Warlord Games pulled-forward the initial releases for the Isorian faction for Beyond the Gates of Antares – and this week, they are proud to announce that you’re now able to pre-order the Skirmish Force army deal, shipping late March – with further individual releases to follow

During the long period of isolation that followed the collapse of the Sixth Age many human settlements failed altogether. Advanced civilisations declined to barbarism. Only in a very few places was the light of knowledge carried onwards. One such place was Isori, with its long history of technical expertise and the unique resources of the Isorian system behind it.

Applying their vast technical skills the Isorians began to improve space drives and discovered ways to increase the endurance of spacecraft and their crews. The flexible nature of space-fabric had long been understood, and the Isorians used this knowledge to build ships capable of reaching near-light speeds previously thought impossible.

Warlord Games continues to expand their lineup of miniatures for Beyond the Gates of Antares 28mm sci-fi setting with their new Battle and Assault Squads, Outcasts and Flitters 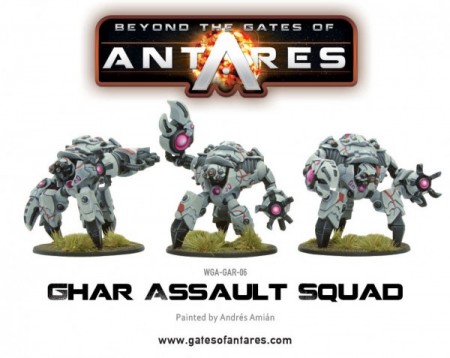 Ghar Outcasts are the lowest of the low in Ghar society and possibly even lower than that. They have been robbed of any status amongst their kind and condemned to undertake the most menial and dangerous of tasks. Fighting as an Outcast is a sentence that few survive and even fewer escape from to regain their former lives. 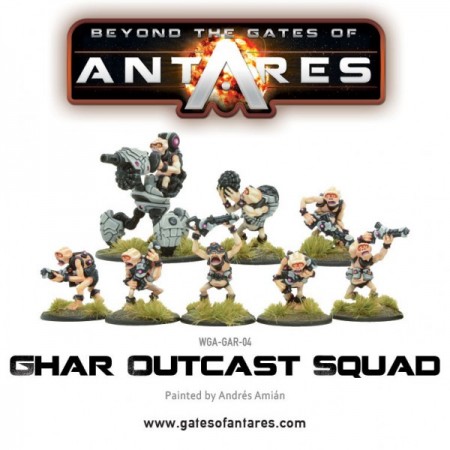 Such is the Nature of the Ghar that even Outcasts continue to value power, still rating their status in terms of the number of other Ghar who must answer to them. Betrayal can advance even the lowliest Outcast and if they’re lucky they may receive their own maglash and become a slave driver, a leader of sorts, to those unfortunate Outcasts beneath them. 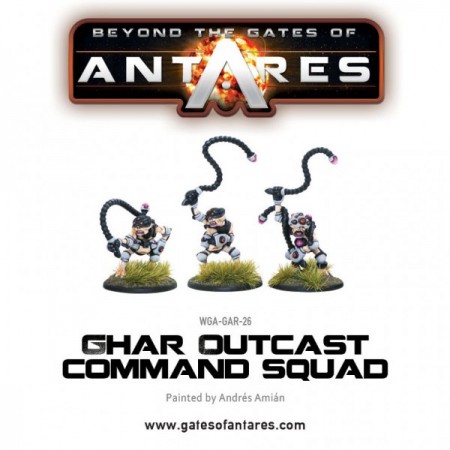 Ghar Flitters are not probes in the same way as those of advanced Antarean societies such as the Concord. Flitters are tiny fragile ?ying cameras with mechanical wings a little like a bat. They ?y in a jerky, irregular manner and are attracted towards movement, but are not even remotely intelligent machines. They broadcast pictures that can be picked up by Ghar battesuit and vehicle interfaces, giving Ghar troops a glimpse of the battle?eld from the ?itter’s perspective. 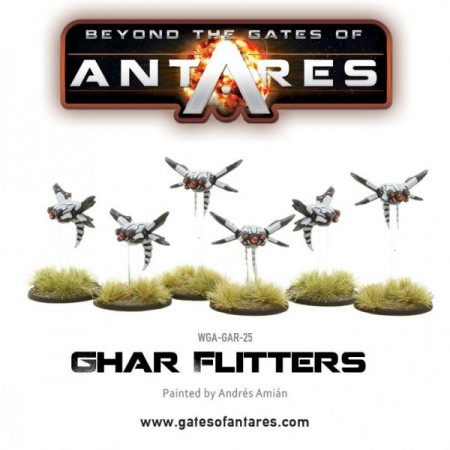 Warlord Games have released all the Supplies you need to play battles in the Antarean universe with their new Antares Battle Supplies! Templates, Concord Order Dice, Ghar Order Dice and Pin Markers

The templates are made in a clear blue plastic and allow you to show a variety of things on the battlefield. The round blast area effect (or Shot template as it’s known in Antares) is fairly obvious, and will be familiar to experienced wargamers. The sprue is packed with a wide variety of templates – all of which are used to represent the effect of various drones and munitions in the game.

When a unit is shot at by an enemy unit and suffers one or more hits it takes one pin once any casualties have been removed. Some kinds of special munitions are designed to in?ict extra pins; for example netmunitions, which cast a temporary suspensor net over the target.