Based on the Season 1 episode of Adult Swim’s hit series Rick and Morty that features a multitude of Ricks and Mortys from different realities, the deck-building game allows 2-5 players to become various versions of Rick as they try to take down the Council of Ricks and Evil Rick. This competitive game utilizes Cryptozoic’s popular Cerberus Engine in new ways, as players use Portal Guns to access the otherworldly Location deck, which includes many of the bizarre places Rick and Morty visit in the fan-favorite TV series.

“With new card types ‘Rick’ and ‘Morty,’ you know you’re going to see a ton of the various wacky Ricks and Mortys found in the episode,” commented Cryptozoic’s Matt Hyra, the game’s Lead Designer. “But don’t worry, the rest of the family is included. Beth, Summer, and Jerry are the worthless three cards that clog your deck early in the game. When you see some of the cards that interact with those three, you might not want to get rid of them.” 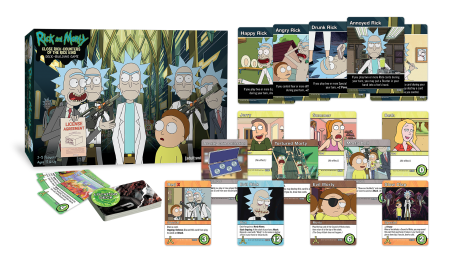 In the game, the Location stack features many of the outlandish worlds Rick and Morty travel to in “Close Rick-Counters of the Rick Kind” and other episodes from the series. Each time a player employs a Portal Gun, he or she may flip up the top card of the Location deck and utilize that Location during his or her turn. The player even has the option to pay the cost of the Location to add it to his or her deck.

Rick and Morty: Close Rick-Counters of the Rick Kind Deck-Building Game will be available at retailers nationwide November 15 for a suggested retail price of $40. The first run of the game will include a “Promo Rick” oversized Rick card in every box.