Brutal Games have decided to make the Corporation Core Rules FREE! Now nobody has an excuse not to immerse themselves in brutal, cinematic cyberpunky goodness.

There will come a time when the nations of the world will cease to exist. When the anachronisms of state and country are finally crushed by the inexorable juggernaut of total corporate domination. When five monolithic Corporations are the new world powers. When the lives of billions are the sole property of the companies that employ them.

There will come a time when the tools of war and politics alike are not armies or diplomats but Agents: the eyes, the hands, and sometimes the knives of the Corporations, individuals elevated to new peaks of physical and mental potential by unthinkable training and unimaginable technologies.

There will come a time when you will be recruited as an Agent, ordered to operate outside any remaining semblance of law and augmented beyond what you once considered human. When you will negotiate, bargain, spy, sabotage, kill and perhaps die in the service of your Corporation – and when you will be well rewarded, as long as you survive.

Neon Knights is a Cyberpunk Battle Racing game with action taking mechanics, modular tracks, car customization and driver skill upgrades that is currently funding on Kickstarter from The Board to Death Team, creators of Street Kings.

Do you have what it takes to join the Neon Knights? Join the XRL (Extreme Racing League) Tournament today!

In the dystopian future of 2086, the city is split in two. The upper class lives in the upper half of the city while the lower class live in the slums. Cash is illegal in the lower part of the city, and the people there now use casino chips from the old world as currency. The upper class business men have created the Extreme Racing League as an automotive racing sport for entertainment. Anyone with a car who lives in the slums can enter. The prize? You guessed it: A pass to enter the city above, crowned as a Neon Knight (Drivers for V.I.P). What you do when you get there is up to you…and another story in itself.

You’ve spent all your chips on building the car and entering the league. Now it’s time to prove your worth in a racing tournament that can only be won by taking risks, and pushing it to the limit. Do you have what it takes to join the Neon Knights?

Neon Knights is a career-driven racing game for 2 to 6 players. You can play single races or in campaign mode which allows you to level up your car and skills as you play. You will advance in your career by buying upgrades and installing weapons and shields on your car. You will also gain fans and sponsorships who will train you in getting the skills you need to become a better driver. During the race you will need to pass over certain street areas to Activate weapons and shield you have on your car, which you can then use on other drivers.

You can go as fast as you want to but some areas of the slums are harder to drive through and will damage your car if you’re going too fast. Will you take those risks? 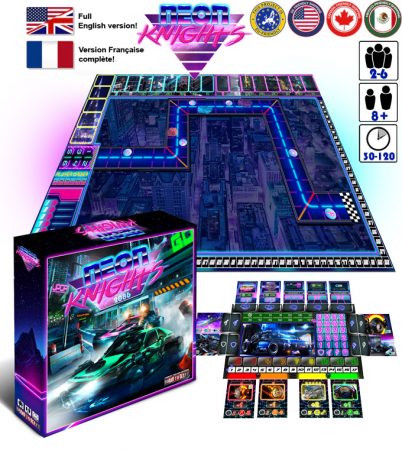 HIDDEN is a tech-noir / cyberpunk adventure created for roleplaying games like Shadowrun and the like. However NO specific game rules are included. The adventure is generic and may be played with ANY science-fiction roleplaying game that takes place in the future and includes cyberspace and cyborgs.

THE BEAST is a fantasy dungeon crawler created for roleplaying games like Dungeons & Dragons and the like. But as with HIDDEN, NO specific game rules are included. This adventure is also completely generic and may be played with ANY fantasy rule system.

Both adventures are priced $1 USD EACH for the PDF download from DriveThruRPG.

Both adventures work perfectly with their own Drudge RPG rule system.

Human Interface: Nakamura Tower, the Cyberpunk board game is now available to the general public after a successful Kickstarter campaign.

Human Interface – Nakamura Tower is a board game that is a unique combination of many elements known from tactical and skirmish games, RPG’s and board games. The game is based on a struggle between two powerful megacorporations that takes place in the title tower.

HINT is designed for 2+ people but through different scenarios can be played alone, in cooperation or against other players. The story happens in the near future when the world is dominated by new technologies.

Headspace is a Cyberpunk roleplaying game about hyper-competent operatives fighting personal battles against the Corporations controlling the world. These unlikely heroes regret the direct hand they had in making the world the dystopian place it is, so now they’re going to try and change the world. Alone, they wouldn’t stand a chance. But with Headspace, an advanced technology to share consciousness, together the Operators can make a difference. But will their Headspace be able to manage the Stress of sharing skills, memories, and regrets?

Armed with Headspace technology, no Operator is ever alone. The Headspace makes everyone in it greater than themselves, able to use each other’s skills with seamless efficiency. So long as one as one Operator can do something, they all can.

Inside this book you will find:

Headspace is inspired by the rules-light framework of Apocalypse World, The Sprawl, Monsterhearts, and Dungeon World.

Take the fight to the corporations. Change your world.

A new cyberpunk style sci-fi board game is in the works right now called Human Interface.

The game is designed for two or more players, but is possible to take on as a solo adventure. From the description offered in the About section of the game’s Facebook page, players will be able to create teams for specific tasks with special equipment, implants, chips, and weapons. Teams will “break the firewalls of corporate terminals and gain supremacy in battle.”

There is no official information as to when the game will launch.

Do you remember Cyberpunk 2020? Interface zero? Johnny Mnemonic? Are you funs of Blade Runner, Matrix, Repoman, Ghost in the Shell? So we are sure, you will love our new game. Hint (abbreviation for Human Interface Nakamura Tower) it’s a board game taking place in near future, when the world will be dominated by cyber technologies and the dirty plays of mighty corporations and powerful governments. The world that is all about the quickness of reaction and the speed of fired bullets.

The game is for 1+ players, and it features excellent models, modular board, cards, tokens and detailed rules. Combat in network? We have. Gunfire? No problem. Mortal combats. Sure! Operations in tactic networks? Present. Cyborgs, drones, clones, assault groups, agents? There are, or will be soon.

Aegis Studios has released their Cyber8s Tech Manual, bringing their Crazy8’s system into the world of Cyberpunk.

Cyber8s is a cyberpunk setting for use with the Crazy 8s Rules-Lite Universal Game Engine. This sourcebook is intended to provide setting material and supplemental rules to allow Talespinners to craft stories in a futuristic, dystopian cyberpunk world.

As the Crazy 8s Rules-Lite Universal Game Engine is designed to be a rules-lite RPG experience that can be easily learned, Cyber8s seeks to introduce useful material to craft cyberpunk stories without bogging the game down with numerous, complicated rules.

The Cyber8s Tech Manual is released under the Open Game License, allowing anyone to use this game engine as a jumping off point for creating their own worlds and game settings.

The game supposes new nations in conflict over North America, an artificial intelligence sewing intrigue in Europe, new lifeforms resulting from hacked human DNA, and a Global DataNet accessible directly by the minds of users via the Tendril Access Processor.

As a second edition financed with a hugely successful Kickstarter campaign, Interface Zero 2.0 updates the game to Savage Worlds Deluxe, streamlines the rules in certain areas (such as cyberware and hybrid creation), adds new rules (to hacking and for creating mechas), expands the included setting information, and brings the campaign timeline forward a few years.