This is a co-op game where players take on the role of pirates attacking and raiding a ship. The only two problems with this is:

1) They set the ship ablaze prior to boarding it.
2) The ship turned out to be full of undead!

The goal of these suicidal raiders is to loot a certain amount of treasure, the number of treasure tokens depend on the number of players, before the ship you are raiding blows up or before you are overrun by the undead deckhands.

The game works as such, each player controls a pirate character with his or her special rules which often give you additional action beyond the normal “move, fight, extinguish flames, loot”. At the start of each player turn the active player draws a tile from the stack and places it adjacent to another entry point on the starting board. This simulates exploration of the ship as time goes by. There are several tricky parts to this placement of new rooms – first of all you don’t want to place them in a long corridor as rooms can be destroyed if the fire level reaches 6 or if the room explodes from a chain reaction of exploding powder kegs. Second is that you don’t want too many rooms with the same starting fire level bunched up together as that may create an inferno that gets out of hand quickly.

Each tile is marked with either a yellow or a red marker, on which you place a starting fire level six sided die. Spending action points you may decrease the fire level of a room by 1 for each action point spent. You can extinguish flames completely, but, there is an event deck from which you draw cards each turn that either increase existing fires (for instance the card may say “increase fire in rooms with a yellow die showing a 4) or start new ones. A lot of your actions will be spent on fighting fires to create clear corridors for your characters to move through hauling loot.

Fire level is lethal as it adds exhaustion to your character, moving from a cool untouched location to a burning room adds fatigue points. As your character gets more tired you can no longer enter rooms of a certain temperature. Fatigue can also drop when being attacked by undead pirates spawning on the board as they constantly move towards the closest friendly player.

Beside the fire hazard there are also the undead deckhands. These spawn from certain entry points on the emerging board, and you must keep them under control. Should you run out of deckhands you lose the game as you have been swarmed. You kill and remove 1 deckhand per action point spent. Deckhands are added either to the spawning points- or spread to adjacent rooms depending on the event card. 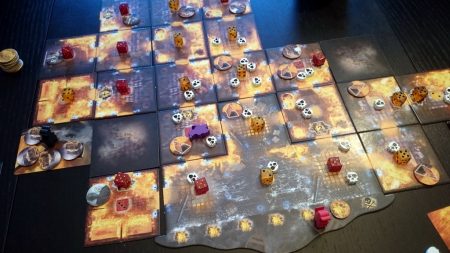 Once you have placed all rooms, meaning there are no tiles left, you have found a second breach in the ship and can now escape with treasure tokens through a second entry/exit point.

Every time you move out of the burning ship your character catches his or her breath and regains some fatigue, you can also use action points to rest your character but with the fires burning, and deckhands spawning, pirates roaming and event cards playing out you will be hard pressed to constantly do stuff with your character each turn and resting may end up being a low priority.

Should your character succumb to the heat or be killed, you draw a new character and continue playing. However once all required treasure is hauled to safety, any remaining characters on the ship must survive their trip back to your own ship – a death at this point means game over.

There is not much more to say about Dead men tell no tales, it’s a quick and fast paced game with no difficult rules but the game itself is very difficult. We have lost more times than won, and those victories have been pulled off by a slim margin. There are two really well working game mechanics here working together, the fatigue and the fire level of rooms.

It feels natural that heat will knock you out, and fighting fires is both necessary and a lot of fun. The feeling of having extinguished a section of the board is great – equally is the feeling of despair when only minutes later the fire returns and increase in strength! There is also a level of panic as rooms and corridors get closed off as tiles explode and become impassable terrain. Finally the game also throws in the undead captain of the ship who spawns as either a “easy” or a “hard” version and returns each time he is killed.  Having that high level maniac chase you through burning hallways as you try to escape with treasure is great fun!

We’ve had lots of fun with Dead men tell no tales, and also a lot of frustrating times with many defeats. It’s a great filler game that you can start your boardgame evening as you will most likely be too frustrated to play two times in a row if you lose!

Also the game looks GREAT! Just check out all those fantastic tiles with flames, water and all kinds of detail printed on them. You can almost smell the burning wood!