That’s 6 feet of continuous terrain for your table, ready to go out of the box, printed on mousepad (neoprene) material, easy to cut and make any junctions, turns and layout you can imagine.

They have a Dirt Road, Cobblestone Road and River stripe available.

Dimensions: 9 cm in width, 183 cm (6 feet) in length
– The paint are soaked into the material and will never scratch or fade off
– Non slippery backing to keep the tiles on the table
– Instant tile flatness and smooth surface
– Easy to cut with snap-off blade or scissors to make any layout, turns and junctions

“YOU SHALL NOT PA… Hm, looks like you will”. Do your rolls need that one extra point to make it happen? Do your dice feel sad and out of touch with you?

Deep Cut Studios have a solution – Dice Trays! Give your dice the attention they deserve, let them enjoy their personal tray and let them shine when you need it most. Give your rolls a boost with the new mousepad dice trays, featuring high quality print, premium materials and a number of designs to choose from.

A new Walking Dead game mat from Deep Cut Studio has been released!

Walking Dead miniature game just got better with the fresh release of a new game mat for it. It is 360 degree compatible with the setting – the scale, the mood, the usability.

With just a few slices of the hobby knife you can turn this mat into 6 independent 2×2 size mats. Further on, each can be used together to create various 2×4 size boards for larger games. Sounds great?

Written by Anatoli on October 12th, 2015 at Anatoli’s Game Room

I love BloodBowl, and I really wanted a pitch to play on of my own – without having to shell out  ridiculous amounts for used parts on Ebay.

A friend ordered a custom made BloodBowl pitch a few years back but that option was too expensive for me, and as it turned out the squares on the board were slightly bigger than the original gameboard which made the throwing template inaccurate when reading the range bands.

So, an evening of browsing led to to DeepCutStudio and their array of gaming mats. Having weighed the pro’s and con’s I went ahead and ordered 3 gaming mats. One of them is this BloodBowl pitch which has its main play area mirror the original BloodBowl pitch from GamesWorkshop perfectly in terms of size (I compared with an original game that a friend brought over). Each square is 29mm wide.
The mat includes the pitch,  as well as a scatter template for both players, and areas marked out for the reserves, Knocked Out and Morgue. It also features a counter on both sides to keep track of the turns, which half of the match you play and number of re-rolls left. The only thing missing, oddly enough, is a score counter – I guess this was simply overlooked. You can keep score easily using pen and paper, dice or any other method.

The mat itself is made from durable vinyl with a high quality print. It is however like most vinyl gaming mats slightly glossy if a light source is directed straight at it from a sharp angle. On the other hand, you can roll it up and transport/store it easily

Imo it was well worth the money.

And as I had the pitch I also needed a measuring stick and some Blood Bowl dice, these I acquired from the NobleKnight games store in the US (the manufacturer for both products is Impact Miniatures I believe). A local retailer also had these products in his catalogue but they were sold out so I had to buy them from the US which turned out a lot more expensive than I would have wanted – but at least the dice and the measuring stick are also perfect matches to the original deal from GW so in the long run money well spent.

Now to paint up the remainder of my Orc team so I can alternate between them and my Humans. Caroline also shows interest for the game and plays the PC version so she will most likely also want to play the tabletop version. And as a small bonus, some pictures from the first game played on the new pitch against my friend Daniel and his Chaos Dwarfs. The game ended 1-1 after an intense first half where one of my linemen tackled one of the Bull Centaurs which got killed in the process. I then lost the initiative in the second half, and a mistake on my part opened a window for my opponent who scored a draw. 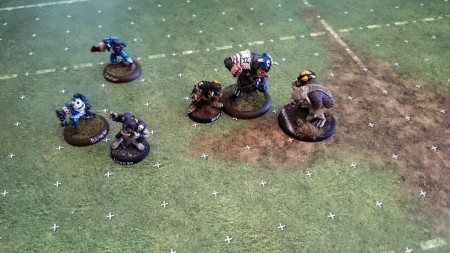 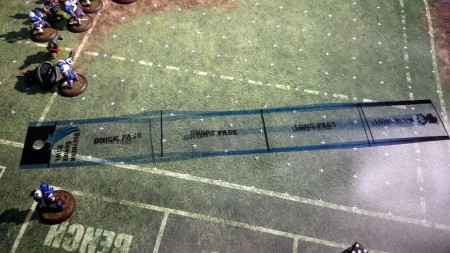 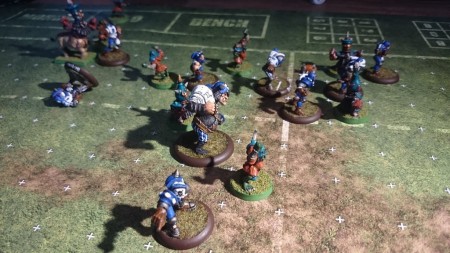 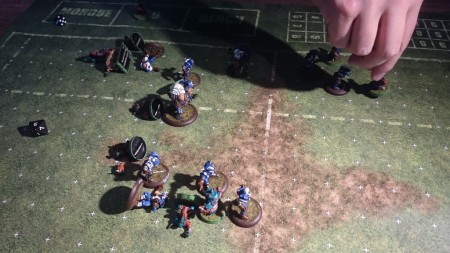 Deep-Cut Studios have released another new gaming mat; The title Space Hulk speaks for itself and is a great background for all your sci-fi battles. As usual, the mat is available in several sizes and material options to suit every taste. Check our website for more visuals!

Deep-Cut Studios has a new gaming mat release! They present another updated design and this time it is City Ruins theme. The mat is compatible with tanks, hovercrafts, jump packs, terminator endoskeletons and much much more. It comes in various sizes and various materials to suit various game rules, tables and tastes.

These terrain mats are ideal as stand-alone scenery or background for the usual terrain elements.

PVC mat:
– Made from high durability PVC
– Non textured gaming surface with high quality printed picture
– Resistant to scratch and tear as well as dirt stains
– Compatible with water based pens
– Shipping tubes can be used as easy storage
– The choice for a sturdy and cost friendly battlefield

Cloth mat:
– Made from lightweight synthetic cloth
– The paint are soaked into the material and will never scratch or fade off
– Can be machine washed or ironed with steam
– The choice for an ultra-portable battlefield

– The mat can be manufactured with any size grid or hexes as well as tailored to a custom size table. See the description in Custom Work menu
– City Ruins theme

Another new gaming mat release from Deep Cut Studios has been released. Their latest addition to miniature games mats is a dedication to everybody who loves aerial combats.

The mat is available as 4×6 size background or two separate 3×4 size mats that make one continuous 4×6 size image. Manufactured on PVC for heavy duty usage or synthetic cloth for ultra-portability they are a must have for dogfight lovers. 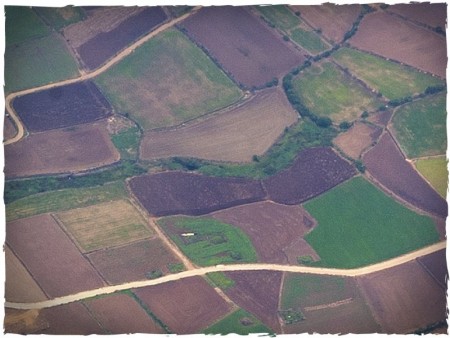 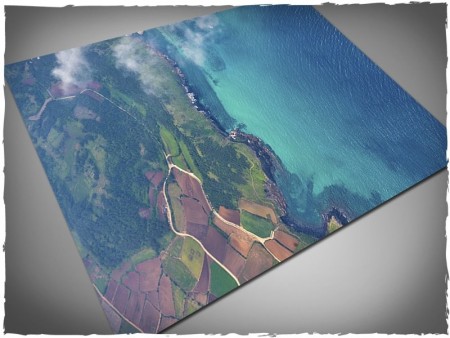 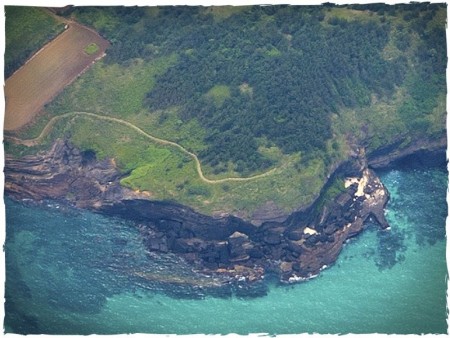 The mats are available as PVC versions for constant use and abuse or cloth versions for ultra-mobile gaming table. Exceptionally detailed professional artwork.