On the shores of Lake Victoria sits the city of Jinja, a population hub poised to explode with economic activity. The site of a potential second beanstalk to the stars, the burgeoning city has attracted an army of workers. But what secrets does the city of Jinja hold? What threads of truth can be found down the White Nile? Find out today!

Down the White Nile, the second Data Pack in the Kitara Cycle for Android: Netrunner is available now from Fantasy Flight Games!

This Data Pack introduces a daring new Shaper identity, viruses to propagate chaos, new tools for the corp that punishes runners for invading their servers, and the ultimate way to distract the masses. 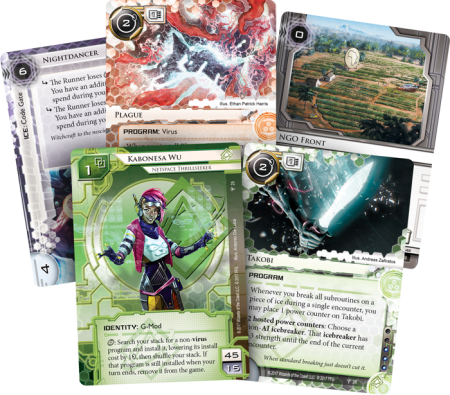 Fantasy Flight Games is proud to announce the upcoming release of Down the White Nile, the second Data Pack in the Kitara Cycle for Android: Netrunner The Card Game!

Situated along the equator, on the northern shores of Lake Victoria and near the source of the White Nile, the fast-growing city of Jinja is destined to become a major global power. There, the nations of the Sub-Saharan League have gathered a small army of workers. Their tasks? To help the world’s second beanstalk grow through and out of its early stages of construction. To replicate the closely held secrets of Weyland’s buckyweave. And to raise the colossal tower until it brushes against the heavens.

But while so much of the city’s activity aims toward the skies and beyond, there’s plenty happening on the ground—and behind the locked doors of Jinteki’s Kisu2 Hospital. The biotech giant has established a good survival rate for patients suffering from the HV-X hemorrhagic virus, but how have they done this? Bacteria and viruses (both physical and virtual) feature heavily in Down the White Nile, as the Data Pack’s sixty new cards (including three copies each of twenty different cards) continue to explore every aspect of life along the shores of Lake Victoria, even touching on the boundary between life and death. 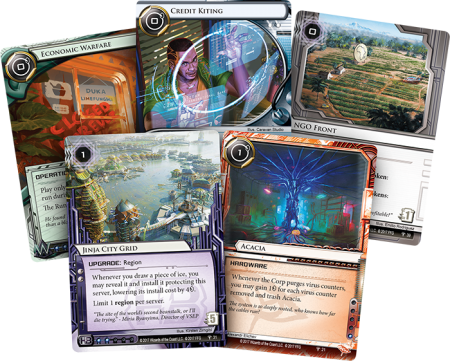