Explore a wealth of peril and personalities for the world’s greatest roleplaying game.

When you’re just starting out in the adventuring business, it might be nice to have a leg up. It can be a big help to have access to the powerful artifacts, expertise, and jobs that Acquisitions Incorporated (Acq Inc) has to offer a new franchise. Join Omin Dran, Jim Darkmagic, and Viari like never before with the new Acquisitions Incorporated campaign book for Dungeons & Dragons!

Set yourself up for success when pursuing your own fantasy-business endeavors, using all the ingredients you need to include Acquisitions Incorporated in your D&D campaign, to establish your own franchise, and take on specialized roles therein. Plus, there are always openings coming available… Just try not to think about why.

WizKids has announced the release of the new D&D Icons of the Realms: Waterdeep: Dungeon of the Mad Mage .. what a mouthful to say, but a lot of minis included in the set!

In the city of Waterdeep rests a tavern called the Yawning Portal, named after the gaping pit in its common room. At the bottom of this crumbling shaft is a labyrinthine dungeon known as Undermountain, domain of the mad wizard Halaster Blackcloak who has seeded his lair with monsters, traps, and mysteries. This set of collectible figures perfectly represents many of the monsters and villains found throughout the 23 levels of Undermountain detailed in Waterdeep: Dungeon of the Mad Mage.

Waterdeep: Dungeon of the Mad Mage includes exciting new player characters & monsters like the Elf Cleric of the Grave and the terrifying Death Tyrant. Undermountain’s most infamous villains make an appearance, including the Mad Mage, Halaster himself and his ambitious apprentices. This set also includes several classic creatures such as the benevolent Flumph and the 3-eyed terror known as the dreaded Froghemoth!

Collect all 44 figures from Waterdeep: Dungeon of the Mad Mage, the newest set of randomly sorted monsters and heroes in our exciting line of D&D miniatures, Icons of the Realms.

Layer upon layer of devious traps and classic monsters await at the click of a button! Roll20’s digital conversion of the latest D&D adventure, Waterdeep: Dungeon of the Mad Mage, puts the full book at your fingertips and on your screen for $49.95.

You can also expand your lore options with eight new races and background options from the newly D&D-ready Magic: the Gathering setting of Guildmaster’s Guide to Ravnica, which also launched on Roll20!

In Waterdeep: Dungeon of the Mad Mage, adventurers have long converged on Waterdeep to test their mettle in the famous caves beneath the city. The mad mage Halaster makes his domain inside the Undermountain, turning each level into a unique playroom for his twisted imagination. Parties will venture everywhere from a forest refuge to an extraplanar challenge and meet classic creatures from menacing mindflayers to friendly flumphs. Every word, map, and monster has been converted to Roll20, taking care of all the preparation work so anyone can run this adventure right from their web browser.

This official Roll20 conversion includes not only the fully converted adventure, but also a bonus token pack, map pack, and card decks that can be applied to any game. To make it even easier, all Roll20 Plus and Pro subscribers automatically received the “Dungeon Level” of the adventure free for use in their campaigns!

One of the most powerful wizards in the Dungeons & Dragons multiverse shares some of his hard-won knowledge with fans in a new book full of lore and monsters for D&D fifth edition. Mordenkainen’s Tome of Foes is available from Wizards of the Coast everywhere on May 29, but you can pick up a limited alternative cover in game stores on May 18, 2018.

Mordenkainen hails from the City of Greyhawk, but over the eons he has expanded his mastery of the major conflicts in the multiverse. Similar to 2016’s Volo’s Guide to Monsters, Mordenkainen’s Tome of Foes not only contains everything you need to run challenging new monsters at the table with your friends but also provides tons of storytelling information on some of the most contentious relationships in the multiverse. You’ll learn more about the schism between drow and other elves, githyanki and githzerai, and dwarves and duergar, in addition to reading about the incessant Blood War between demons and devils.

Players will love to delve into Mordenkainen’s Tome of Foes to search for story hooks to use with their characters, as well as try out some of the player options for races like tieflings and elves, or maybe an otherworldly githyanki or githzerai. Dungeon Masters looking for inspiration and greater challenges for players who have reached higher levels of play will find much to explore in Tome of Foes.

Journey To Ragnarok, a brand new project for 5th Edition (5e) about Norse Mythology is now live on kickstarter and over achieveing day by day.

The idea behind Journey To Ragnarok was to merge our biggest passions: the 5th Edition of the most famous role playing game of all time and, of course, Norse Mythology.

Every single event, NPC or encounter that will cross Adventurers’ path is the result of more than 15 years of love and research, readings and travels.

Our intent is to let the Adventurers discover and explore the true origins of Norse Mythology, that has deeply influenced Fantasy literature, games,comics and movies.

The author is Michele Paroli, an architect and a graphic designer but first of all a role-playing gamer and Dungeon Master. Then there’s Antonio dell’Aquila, in charge of marketing and comunication activities, a product manager in the everyday life, but also a roleplaying gamer and dungeon master since 1999.

The core team counts many veteran DMs and adventures designers and we’re proud to tell that we were part of the organization and DMs of the first ever D&D Adventurers League Epics Event in Italy @Lucca Comics&Games 2016 and @Play Modena 2017.

Assault of the Giants, the next Dungeons & Dragons-derived board game for 3 to 6 players from WizKids, is scheduled to hit retail in February.

Each player issues commands to his or her giants in the form of command cards (recruit, move, attack, pillage, and so on). This allows players to recruit new giants, send them out to attack settlements and other giants, and also to pursue special agendas based upon their race. For example, the Storm Giants seek to restore their lost monarch, King Hekaton. The Cloud Giants seek an ancient dragon treasure trove, and the Hill Giants seek an abundance of food with which to feed their massive monarch, Chief Guh.

In Assault of the Giants players send their giants out to wage war on each other and the small folk, but the game’s real strategy lies in each player’s ability to pursue their giant race’s unique agenda, not only through combat but also through clever cardplay.

WizKids has announced the upcoming release of two new Dungeons & Dragons products for Wizards of the Coast’s story line coming in August 2016: Storm King’s Thunder and Assault of the Giants

In the Storm King’s Thunder story, giants return to the Forgotten Realms in force as they engage in epic battle for glory and territory, while humans and other small folk try to find a way to survive amid the upheaval.

Expand your collection of D&D roleplaying game miniatures with the release of the fifth set in the Icons of the Realms line, Storm King’s Thunder. Collect all 44 figures in this newest set of randomly sorted monsters and heroes. Arriving in select stores in September!
Assault of the Giants is a new Dungeons & Dragons board game designed by Andrew Parks. Designed for 2-6 players, Assault of the Giants challenges players to command one of the six types of giants and claim the right to rule over all giantkind. Command giants and assault settlements to score points and secure important resources, including food, treasure, ore, and runes. Contents include 14 Giants miniatures, measuring from approximately 4” to over 5 ½” in height.  Assault of the Giants is scheduled to release in Spring 2017, with an MSRP of $99.99 USD. 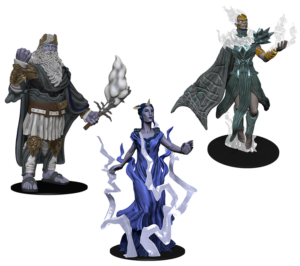 During the spring equinox, on the Ides of the Falcon, the peaceful village on Lake Pertalo readies itself for the Fertility Feast of Agnor in celebration of a long winter coming to an end. All preparation comes to a sudden halt, however, when the community is overrun by an enemy that disappears as quickly as it arrived. Many are killed or wounded, but it soon becomes clear that this was not the goal of the raiders … All of the village’s children are now gone, apparently carried off in the chaos of the attack. As the characters begin to search for the missing children, they will discover a plot far more sinister than any of them had imagined … and possibly be destroyed by it.

Players will face a wide variety of perils throughout the course of this adventure, ranging from Goblin depravity to mystical puzzles and mysteries unknown, as they take their first steps toward learning the fate of the missing children. May the gods be with them in their quest!

This module includes six pre-generated starting characters that players can use if desired to jump right into the adventure.