Battlefront have given previews of the Desert Rats and the Afrika Korps for use with Flames of War 15mm Miniatures WW2 Wargames.

The Desert Rats are the only thing standing in the way of Axis conquest of North Africa. Despite suffering repeated defeats at the hands of Rommel’s Afrika Korps, they remain undaunted. Their speedy Crusader and Honey tanks can run circles around their opposition, backed up by the heavier Grant squadrons. Their motorised infantry are equally adept in attack or defence. With support from the Royal Artillery and the Desert Air Force, they are a formidable and versatile force. 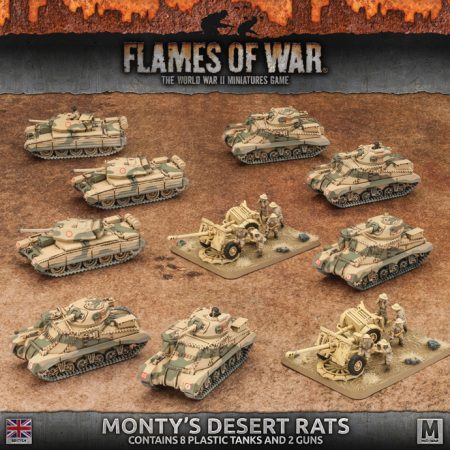 The German Afrika Korps is a hard-fighting force of tough veteran troops who have won many battles and expect to win many more. Their Panzer III and Panzer IV tanks outclass the British tanks they face, and have been steadily upgraded to maintain their edge over the opposition. Their infantry are organised to have ‘few men, many weapons’, so they pack a ferocious punch whether facing infantry or tanks. These are backed by the famous ‘88? dual-purpose anti-tank/anti-aircraft gun and the Stuka dive bomber. 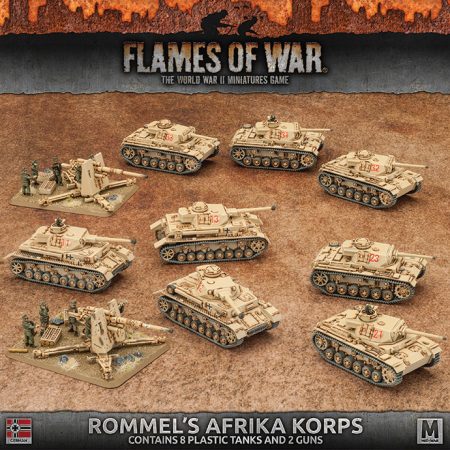 Battlefront have released their Battlefield in a Box: Medium Desert House for Flames of War 15mm WW2 Miniatures.

Scenery has always played a vital part in Flames Of War. With the pending release of 4th Edition and the return to the desert for Mid-war, we’ve taken the opportunity to refresh our range of Battlefield in a Box desert terrain.

Four walls and a roof provide the infantryman with protection from small arms fire and shell fragments. Making them difficult to winkle out without the aid of some real firepower.

Also released are their Desert Escarpments Battlefield in a Box set. These naturally occurring slopes are a tank crew’s best friend. Blocking line of sight; allowing room to manoeuvre and outflank the enemy or providing concealed firing position when taking up a hull down position. 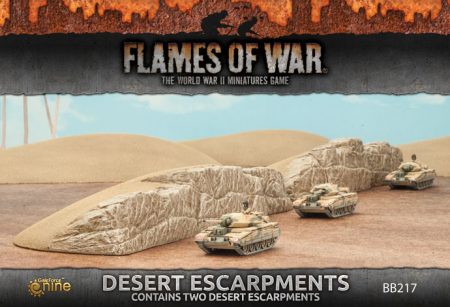 Gale Force Nine have introduced a Desert Basing Kit for your Flames of War Miniatures.

Basing is an important part of the look of any Flames Of War force. A strong theme is the sort of that can really make your force standout from the rest. With the new Desert Basing Kit, Gale Force Nine made it easier for you to create your desert bases for 4th Edition and the return to the desert.

Created with a unique collection of static grasses, basing grits and paint colours, the Desert Basing Kit provides everything you need to bring your desert-themed bases to life.

One of the heaviest artillery pieces available to the Red Army in the street-to-street fighting for Berlin was the 203mm obr 1931 howitzer. Weighing 19 metric tonnes, it was mounted on its own special tracked carriage.

Includes one multi-part metal 203mm obr 1931 Howitzer with five crew figures, one large artillery base and one plastic base-plug sprue.

Battlefront has added a new box to their line of Flames of War 15mm plastic miniatures.

The Strelkovy form the bulk of the Red Army. Their role is to break through the enemy defences, forcing a gap for the mechanised troops to exploit. These formidable troops are now the latest additions to the Flames Of War plastic miniatures range.

Free World forces in the Republic of Vietnam faced the day-to-day paranoia of dealing with a civilian population whose loyalties could not be guessed. Any man, woman, or child of the local populace could be working for the resistance, reporting on troop movements, providing false information, or sniping at the enemy. With the Local Forces came three advantages for the regular North Vietnamese force. Firstly local knowledge of the terrain; secondly, local supplies to be had; and third, numbers to bolster any prolonged attack or campaign. Local Forces lacked the equipment of the regular forces but were inventive and used their local knowledge to lure Free World troops into traps and ambushes.

Used to great effect against enemy helicopters, these Type 54 12.7mm anti-aircraft guns would be placed in a triangle, and when the enemy would be near the center, they would open fire, catching their foes in a killer cross-fire. They could then be taken apart quickly and moved before enemy counter-fire could pin them down.

Battlefront has released their plastic British Comet Platoon for Flames of War.

The Cruiser Tank (A34) Comet was the pinnacle of British cruiser tank development, following on from the Cruiser Mk VIII (A27) Cromwell. With its powerful 600hp Rolls-Royce Meteor engine, the Comet retained the Cromwell’s speed, but with improved armour protection. Its powerful 77mm gun was a match for all but the heaviest enemy tanks. 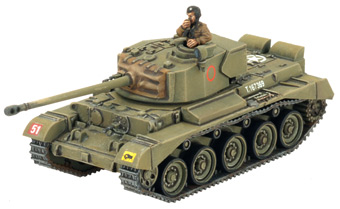 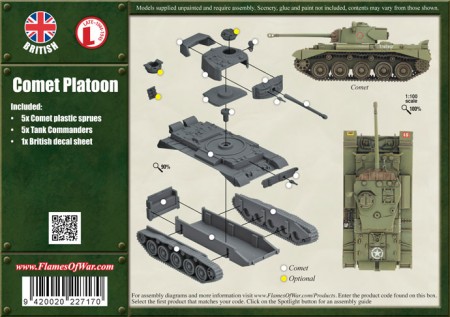