With an official population of over 500,000,000 people, you never know who you may run into during your adventures in New Angeles. From rogue bioroids to megacorp executives, a chance encounter could spiral into a world of trouble… or the perfect opportunity to make a profit.

Fantasy Flight Games is proud to announce three new adversary decks for Shadow of the Beanstalk, an Android sourcebook for the Genesys Roleplaying System!

Each of these decks features twenty cards representing powerful adversaries from the Android universe. These cards feature all of the vital stats and information that you need for these characters to be used during your games of Genesys, giving Game Masters the tools to keep the game running while introducing new NPCs into your adventure!

While two of these adversary decks exclusively feature characters found in the Shadow of the Beanstalk sourcebook, within the Runners, Mercs, and Criminals Adversary Deck you’ll also find adversaries that are profiled for the first time within this deck! 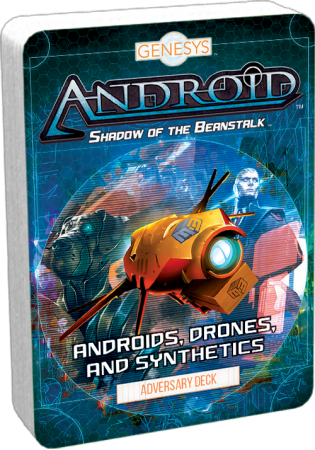 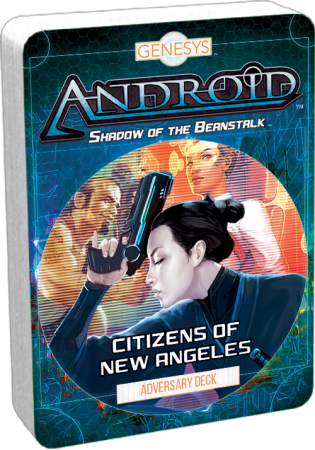 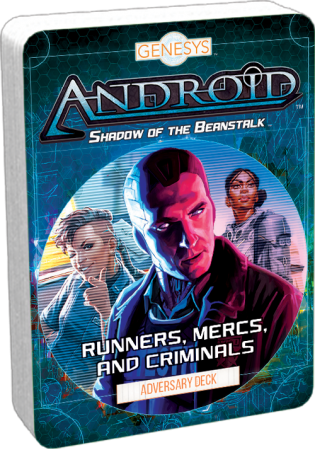 Fantasy Flight Games is proud to announce Shadow of the Beanstalk, an Android sourcebook for the Genesys Roleplaying System!

Enter a cyberpunk future and take on the roles of cops, con artists, roughnecks, and escaped androids trapped between greedy corporations, corrupt officials, and vicious street gangs. Outwit your foes, uncover their conspiracies, flee their retribution, and maybe you’ll survive. Who knows? Maybe you’ll even get rich…

Shadow of the Beanstalk is a 256-page sourcebook for use with the Genesys Roleplaying System. In this book, you’ll find new rules for character creation, new weapons, equipment, and adversaries, new rules for running the net, a guide to New Angeles, and advice for Game Masters running a campaign in the cyberpunk future of Android. Even better, all of this comes accompanied by beautiful art and elegant mechanics that can be used in any science-fiction setting for the Genesys Roleplaying System.

The citizens of New Angeles live in the shadow of the Beanstalk. While humanity has stretched its reach to the stars, most just struggle to get by. You may have exemplary skills, but in this world, standing out can get you killed. Do you have what it takes to survive the crowded streets of New Angeles?

Enter a new cyberpunk future with Shadow of the Beanstalk (GNS04), available now for pre-order from Fantasy Flight Games.

Realms of Terrinoth, a new sourcebook for the Genesys Roleplaying System from Fantasy Flight Games is now available from your local retailer or digitally through Drivethrurpg.com and rpgnow.com.

Realms of Terrinoth is a book meant to spark your imagination as a Game Master running a game in the fantasy setting of Mennara. Realms of Terrinoth includes a full history of the land of Mennara, with an overview of its various regions and a breakdown of the enthralling NPCs that can be found there. Even beyond the rich fantasy trappings, you can look for new mechanics like Heroic Abilities and a slew of new talents, weapons, and more. These new mechanics stem from the world of Terrinoth, but they can be expanded to any fantasy setting that you imagine. Use Realms of Terrinoth to run a campaign in the world of Mennara, or as a source of inspiration for your own setting. With Genesys, the choice is always yours.

Realms of Terrinoth invites your players to experience a vivid fantasy setting in the Genesys Roleplaying System. With new mechanics and a fleshed-out setting to assist Game Masters and players alike, adventure is right around the corner. Will you become a hero in the deadly realms of Terrinoth?

Fantasy Flight Games is proud to announce Realms of Terrinoth, a new sourcebook for the Genesys Roleplaying System!

Terrinoth is a land of forgotten greatness and lost legacies. Once ruled by the Elder Kings who called upon mighty magics to perform great deeds and work marvels, the land has suffered greatly at the hands of its three great foes: the undead armies of Waiqar the Betrayer, the demon-possessed hordes of the bloodthirsty Uthuk Y’llan, and the terrifying dragons of the Molten Heath. Many of its great cities have been cast down into ruins, and many wondrous secrets and powerful artifacts have been lost.

For hundreds of years, Terrinoth slipped into gloom and decay. But heroes arise just when their lands need them the most. Courageous adventurers brave the ruins of past ages and the foul creatures within to uncover the treasures of their ancestors. The Daqan Barons, inheritors of the ancient kingdoms, rebuild their walls and muster their armies, while the wizards of Greyhaven gather runes of power to awaken guardians of stone and steel. These preparations come none too soon, for the ancient enemies of the lawful races are stirring again, and Terrinoth needs champions of courage and cunning to stand against the rising darkness.

Realms of Terrinoth explores the world of Mennara featured in Runewars Miniatures Game, Legacy of Dragonholt, Descent: Journeys in the Dark, and Runebound. As a fantasy campaign setting for your games of Genesys, Realms of Terrinoth also features many races, weapons, gear, careers, and more—all of which can be found in the world of Terrinoth and expanded to any fantasy setting you create as the Game Master.

Aim a rocket launcher at a group of supernatural vampires, take command of a starship in an intergalactic war, or explore the depths of an ancient lost city.

With the Genesys Roleplaying System, the adventure begins right now!

The Genesys Roleplaying System allows you to create your own setting to roleplay in. Whether you’re playing as a posse of outlaws in a weird west tale or an unlikely group of heroes fighting against the tyranny of a mad dictator in the far future, Genesys gives you all the tools to need to create your own personal playground.

Genesys utilizes the narrative dice system, a skill-check system designed not just to let you know when a character succeeds or fails, but the side effects that always occur.

The Genesys experience begins with the Genesys Core Rulebook, which features an explanation of the narrative dice system and core mechanics of the game, an overview of five different settings in which to place campaigns, and advice for Game Masters to craft a myriad of adventures with unparalleled freedom.

Genesys utilizes the Narrative Dice System which allows for creative storytelling that goes beyond success and failure, and allows every dice roll to impact the story in dramatic ways.