DC Rebirth is DC Comics most recent reboot of the entire DC Universe that re-imagines many of the most iconic heroes and villains in a stunning, new light! This exciting interpretation of the DC Universe includes new iterations of the usual suspects from the Justice League, JSA, and Teen Titans as well as new and exciting themes like Deathstroke’s Defiance, Justice League China, and the Dark Trinity of Bizarro, Red Hood, and Artemis!

Much like when readers saw the DC Rebirth comics for the first time – we’re sure there are going to be some BIG surprises as they open these boosters!

Marvel Strike Teams puts 2-5 players into the shoes of fan-favorite heroes and villains from the Marvel Universe. Each character has a Heroclix combat dial used to track their level and build points as they play through the game’s various missions and scenarios.

In addition, the exciting Avengers Initiative expansion, also available now, adds some of Marvel’s most powerful heroes and villains, including Loki, the Asgardian God of Mischief, Ultron, Black Widow, and Vision, to the Marvel Strike Teams lineup!

With randomly selected scenarios, multiple Map Tiles, and THOUSANDS of possible encounters, each mission will feel like a fresh new way to save the world!

Xavier’s School for Gifted Youngsters is a special school led by Professor Charles Xavier where young mutants can grow, learn, and control their uncanny powers. See the results of their training on the tabletop with Marvel HeroClix: X-Men Xavier’s School from WizKids!

Xavier’s School will have the return of ID cards, as well as student and headmaster gameplay. Two all-new title characters are sure to make a splash. You and your friends will be able to build your favorite X-Men teams from over the years – Blue Team, Gold Team, the X-Men led by Magneto, and many more! For even more mutant-mania this set will include more than a handful of previously unclixed figures including Phat, Goldballs, Mondo and Surge! 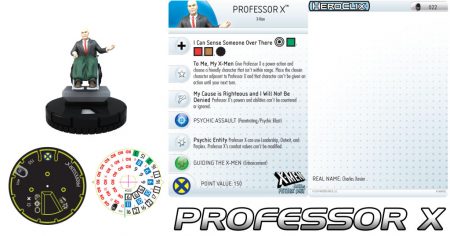 WizKids has announced that Wonder Woman comes to the HeroClix tabletop along with her trusted allies and troublesome enemies!

With an impulse-friendly price point, single-figure foil packs are a great purchase for new and established players alike!

The Most Maniacal Madman in Gotham takes over in DC Comics HeroClix: The Joker™‘s Wild!

Open the asylum— it’s time for the inmates to run amok! The DC Comics HeroClix: The Joker‘s Wild! set features The Joker, The Riddler™, The Penguin™, Mr. Freeze™ and a cadre of other iconic Gotham City villains who have continuously challenged it’s harrowed hero— Batman™. Additional sub-themes include the Justice Society of America, The Outsiders and The Suicide Squad. The DC Comics HeroClix: The Joker‘s Wild! set also features a selection of character using ClixFX bases— an easy way to track on-going game and environmental effects!

The DC Comics HeroClix: The Joker‘s Wild! set has 70 figures to collect:

Today, we’re taking a look at the kookiest of the four turtles, the nunchaku-spinning prankster Michelangelo!  We’ll start off with a version of Michelangelo based on the original 1984 Mirage Comics series.

Michelangelo is an attacker who can bring the fight to the enemy while simultaneously helping his teammates.  To show this, he starts with the Charge and Empower standard powers on his dial.  The early-dial pairing of Charge and Empower means you can have Michelangelo move in for an attack, then bump up an adjacent teammate’s damage value when it’s their turn to take a swing at an opponent.

Like the 1984 comics versions of Raphael and Donatello we previously revealed, Michelangelo has the Fighting through the Swarms trait that allows him to be placed in any square adjacent to an opposing character he hits.  Also like Raphael and Donatello, Michelangelo’s weapons of choice (two nunchakus) are represented as a special power.  That special power, Nunchakus, lets him make two close attacks via Flurry.  Additionally, each time he hits an opponent, he can give that character an action token after actions resolve.

Michelangelo can be added to your force for 50 points and is a viable choice as an attacker who can also slow down an opponent’s force by dishing out action tokens through his Nunchakus special power.

Like the other characters in TMNT HeroClix they also have a Modern version. Head on over to the Wizkids site for more!

The Teenage Mutant Ninja Turtles Gravity Feed features more than 30 characters from the 32-year history, based on both the comics and animated tv series.  Today, we take a look at two versions of the toughest member of the ninja turtles, the sai-wielding Raphael!  First up is #001 Raphael, which is based on the 1984 Mirage Comics series!

This version of Raphael comes in at 50 points and has all the standard speed, attack, defense and damage symbols.  At only 50 points, Raphael leaves plenty of room for the rest of his brothers, and maybe even some allies, depending on your force build total.  He is built for close combat and has a power set that’s appropriate for this role.

The second version is inspired by the 2012 Nickelodeon take on TMNT’s Raphael. View him at the Wizkids Website along with more information about the 1984 Raphael HeroClix

WizKids  are continuing the Booster Brick previews for the upcoming Heroclix set, DC HeroClix: World’s Finest!  The focus of this set is of course on the two stars of the comic series of the same title; Batman and Superman.  In addition to different versions of each hero, representing them throughout their lengthy comic book histories, they would be remiss to ignore how their arch enemies have changed with them over the years.

Today, they feature a villain that was pulled in Scott Porter latest unboxing video, Poison Ivy!