WizKids is previewing one of Gotham City’s defenders and member of the Shadowpact, Ragman for the upcoming DC HeroClix: Worlds Finest set.

Ragman is a 6 click piece, and comes in at 70 points – a bargain for what he brings to the table. To start, he can be played on themed teams featuring the Gotham City, Mystical, and Shadowpact keywords – two of which have significant representation in this set, increasing the possibility of being able to reap the benefits of a themed team in a sealed event. Ragman also has the Mystics team ability, allowing him to deal 1 damage back to an attacker who dealt damage to him.

To kick off 2016, WizKids’ newest Marvel HeroClix: Sinister Six OP Kit features a trio of Spider-Man’s gallery of villains from the Sinister Syndicate. 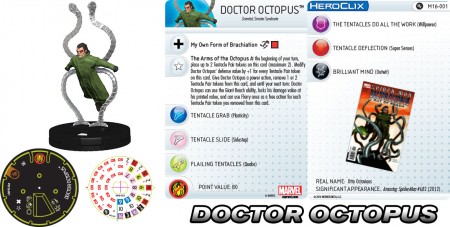 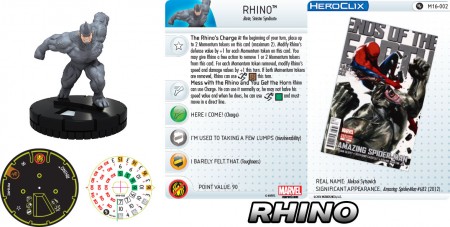 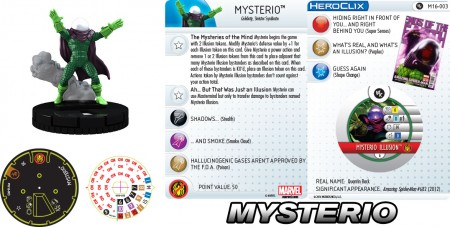 HeroClix fans have been provided with another preview from the upcoming DC HeroClix: Superman/Wonder Woman set from WizKids!

With the inclusion of both the Earth 2 Wonders of the World and Colossal figures in this set, we’re very excited today to bring you a look into The Atom of Earth 2!

With Colossal figures this go around, we wanted to build each for utility to fit into your teams. That’s why you’ll find that each figure has multiple starting lines and point costs. For example, The Atom can be played at 300, 200, 150, 100 and 15 points. If that last point cost seems low, it’s because all our Colossal figures this go around have a one-click point cost, allowing for these characters to be played on nearly any force! Of course – there’s a catch to this, and that last click of each character has a special defensive power called Colossal Indifference.

WizKids welcome you to a decidedly darker look into the world of the upcoming DC HeroClix: Superman/Wonder Woman set as they explore one who is decidedly “For Darkseid” – Brutaal!

Hailing from Earth 2, this imperfect clone of Kal-El is a force of destruction that most of the Wonders of the World can’t stand up to! He begins with three traits, the first of which is called Wait, That’s Not Superman…This trait, which can be found on other characters throughout this set, states that if Brutaal is on your sideline when your opponent’s force is revealed and your force includes a character named Superman or Superboy of an equal or higher point value, you may replace that character with Brutaal. If you do, Brutaal begins the game with an action token.

WizKids continue their series of previews from the DC HeroClix: Superman/Wonder Woman set with another look at an Olympian god who is a recurring antagonist of Wonder Woman.  Please welcome the lord of the Underworld, Hades! Hades has a strong set of combat values, with attack numbers that never drop below 10 and damage values that never fall below 3.  Hades also has an appropriate mix of standard powers that includes Phasing/Teleport, Pulse Wave, Impervious, and Probability Control on his top two clicks.  He then switches to Running Shot, Penetrating/Psychic Blast, Invulnerability and Outwit on his next two clicks.  Hades’ next two clicks feature Sidestep, Steal Energy, and more Invulnerability and Outwit.  Finally, Hades ends his dial with two clicks of Phasing/Teleport, Steal Energy, Regeneration, and Probability Control. 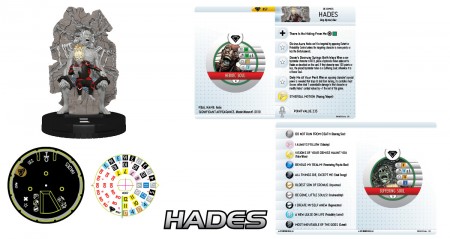 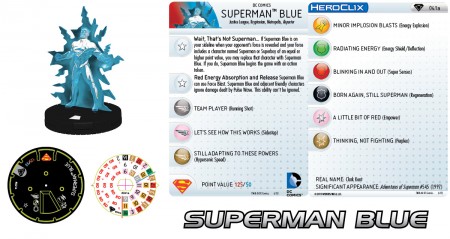 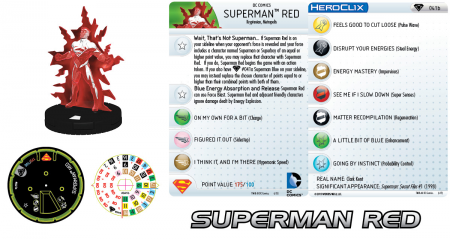 WizKids continues their previews from the DC HeroClix: Superman/Wonder Woman set with another look at an Olympian god who is a recurring antagonist of Wonder Woman.  Please welcome the lord of the Underworld, Hades!

Hades has a hefty point cost of 235 points but comes packed with powers, abilities and traits that make him a force to be reckoned with.  Hades can shoot a single target up to 10 squares away and has an Improved Targeting ability called There Is No Hiding From Me, which lets him ignore hindering terrain when he draws a line of fire.  Hades also has the Indomitable combat symbol, which lets him use Willpower to ignore pushing damage, and has the Mystics team ability to dish out some damage to an opponent who manages to hurt him.

WizKids has previewed the Hulkbuster MkII for their new Agents of SHIELD Marvel HeroClix.

My name is Pepper Potts, CEO of Stark Industries.  If you will look inside the packets handed out to you, you’ll see your access level for this classified presentation from Marvel HeroClix: Nick Fury, Agent of S.H.I.E.L.D. set available now. This short review today is for the first Build-A-Clix ever released and I will be demonstrating its capabilities for this particular audience. The Hulkbuster Mark II is a technological marvel that will ensure any Hulk level constraint you have will be neutralized quickly and efficiently.  That said, I’ll start the presentation now.

The Hulkbuster Mark II comes in with 3 different point values, 200, 300, and 500 of Hulk-busting ability.  Its flight capabilities, Indomitable combat ability, and its 8 range single target are truly revolutionary in our pioneering of the StarkTech Build-A-Clix. If there is a Hulk issue your city, territory, or company is dealing with, our Hulkbuster Mark II can be pointed to it and make the problem disappear.  There is some potential collateral damage so make sure your insurance is paid up!

Agents, it’s time. The forces of Hydra are amassing, and we’re calling in all active members of S.H.I.E.L.D. to prep for deployment.

WizKids have previewed 4 of the new Agents of SHIELD minis for HeroClix coming soon to a table near you.  We can see the big cheese himself, the son of Coul, Agent Coulson, super Agent May, tech wizard Agent Fitz and H.E.N.R.Y., the holographic monkey! 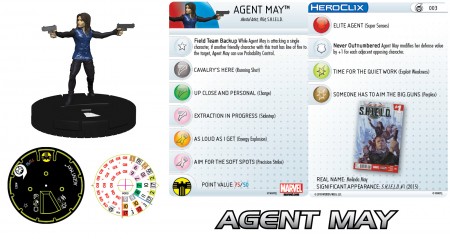 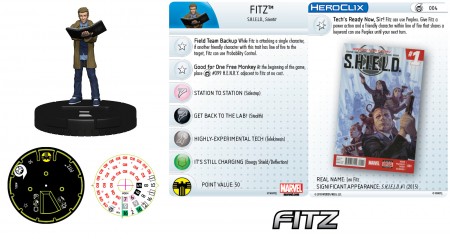 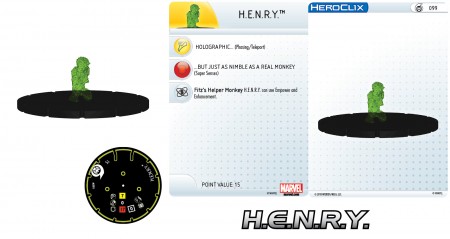