Bunny Kingdom in the Sky adds a new game board to the world of Bunny Kingdom that allows you to link fiefs in the sky with those on land. Aside from the game board, this expansion includes new cards, new types of resources, a set of playing pieces that allow five bunnies to play in the same game, and a larger type of building that increases your influence in that area by a factor of five.

Bunny Kingdom (2017) is a well regarded card drafting and area control game from the magical designer Richard Garfield. In Bunny Kingdom, players draft cards to place resources, bunnies and buildings on the board, trying to create fiefs with the most influence.

IELLO’s 8-Bit Box is a splicing of arcade gaming and board games, with controller-like components used to emulate cabinet inputs and a shared play-space in the form of the board, representing the screen.

In what is probably the most pure fusion of earlier forms of gaming, IELLO’s upcoming 8-Bit Box manages to fuse together early gaming and board-gaming in a way which cleverly emulates synchronised, same-screen play while keeping the slower, observed, tactical nature of turn-based board-game play.

Pixoid, the first of the three games planned to be included in the core box, is an homage to Pac-Man. Including asymmetric multiplayer gameplay — one character racing around the grid while the others hunt them down. It’s easily the strongest example of how turns play out in most of the planned games, with each player analysing the playing field as it stands before tweaking the dials on their controller (secretly) to reflect their planned next move. Players then reveal their controllers for the turn resolution and act out the moves.

While certainly a little disjointed in its removal of the frantic pace of the arcade title, the concealment and reveal of player intent adds a layer of both suspense and tact to the game. Where players in the arcade title were running on reflex spliced with mild foresight, reflex in 8-Bit Box’s Pixoid is instead populated with chess-like forward anticipation and calculation. It’s clever, to say the least.

As it stands, the 8-Bit Box is definitely in the late prototyping stage, although it has already received a light showcasing while at the Nuremberg Toy Fair earlier on in the year.

The 8-Bit Box is currently expected to release before the end of 2018.

Iello has released upsized boards for your Bunny Kingdom!;

The following is a special message from the Kingdom, Bunny Kingdom to be exact:

Bunny Kingdom fans rejoice! We have heard your requests and have printed a larger board with a little more room for added fun!

The slightly bigger board is in the current run of the game, the lot # is: BKEN122017

Current Bunny Kingdom game owners can order the game board UPGRADE on the IELLO website for free (shipping & handling charges to be added). Order the larger Bunny Kingdom board here.

As part of a new retailer-support program of the Game Manufacturers Association, Iello is providing member shops with roughly 2 months of exclusive early access to its upcoming title, Decrypto.

GAMA retail members will be able to sell the game beginning February 22nd, while other brick-and-mortar stores will have to wait until April 19th and online sellers until May 3rd.

Decrypto ($20 suggested retail) is a party game that combines word association and code breaking. Two teams are given displays of four words, each tied to a number (1-4). Then, one member of each team uses related but different words in an attempt to get their teammates to guess secret three-digit codes. If they make their clue words too obvious, though, their opponents may guess the code.

Other participants in the GAMA early release program should be announced at the GAME Trade Show in March.

Restoration Games and IELLO announced a deal to bring Downforce to the rest of the world.

Released by Restoration Games at Gen Con this year, Downforce has been met with near universal praise for its quick play, high player interaction, and top-notch components. Wolfgang Kramer’s original design was featured in such titles as Daytona 500, Top Race, and DetroitCleveland Grand Prix. This new version was restored by Rob Daviau.

“We are committed to bringing the very best we have to every game we release. The finest art, components, and play. Naturally, when we began looking for a partner for foreign-language publication, we were adamant that it be an organization equally committed to those ideals. We know IELLO is just that company, and we’re delighted to be working with them.”

Under the agreement, IELLO has the right to publish in every territory outside the United States. The company already has plans to publish a French version in 2018 and is looking at other versions as well. “IELLO is proud and excited to add a new title brought by Rob Daviau to its catalog. Thanks to our strong partnerships on all continents, we are ready to bring new buzz and love around this game outside of the USA,” said Romain François on behalf of the company.

King Kong is coming to King of Tokyo from Iello!

He is not happy! King Kong is ready to conquer the Empire State Building and Tokyo Tower to find his love. Will you dare cross his path, or worse, capture his beloved?

The King Kong Monster Pack adds new elements to the game: Tokyo Tower for King of Tokyo and the Empire State Building for King of New York!

One of King Kong’s Evolutions introduces the Beauty card, which has two sides that have different effects according to which Monster owns the card.

All the monsters in King of New York are about to get two new sets of evolution cards when King of New York: Power Up hits this October. A new monster, Mega Shark, also makes his appearance with this expansion.

This set will also allow owners of the new version of King of Tokyo to mix in King of New York monsters in Tokyo with Evolution cards.

Set to retail for approximately $20, and you will need a copy of the King of New York base game to play.

Included in the box:

Iello have released the new versions of King of Tokyo and Monster Chase.

The new edition of King of Tokyo replaces Cyber Bunny and Kraken with Cyber Kitty and Space Penguin. It also features reworked, clearer rules and all-new art done by Regis Torres. Both this edition and the Target exclusive edition with Baby Gigazaur will be available for purchase through online and mass market retailers on July 14.

Monster Chase, by Antoine Bauza, is also widely available, through both brick and mortar and online retailers. Our new version of the game features new artwork and a handful of variants that increase and decrease the game’s difficulty, making it enjoyable for young and old gamers alike. 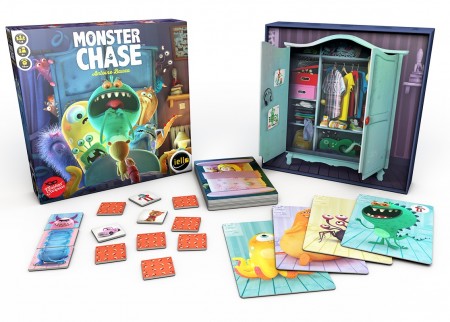