Join the crew of the Ghost and take a stand against the Galactic Empire. Five new products for Imperial Assault are now available from Fantasy Flight Games!

Tyrants of Lothal brings all the action of Star Wars: Rebels to Imperial Assault, the strategy game of epic missions and thrilling combat. A full mini-campaign features your band of rebels joining the crew of the Ghost to take on some of their most dangerous foes, including the brilliant Thrawn and morally nebulous Hondo Ohnaka! Tyrants of Lothalalso offers new ways to upgrade your skirmish games, as you fight head-to-head in the wastelands of Lothal. Meanwhile, an assortment of Ally Packs and Villain Packs offer new missions and lend new depth to the other characters populating the Tyrants of Lothal campaign.

The struggle against the Empire is just beginning. Throughout the galaxy, resistance groups have begun to join together into a Rebel Alliance. The Outer Rim planet of Lothal is under the watchful eyes of Grand Admiral Thrawn, who monitors the planet for Rebel activity, looking to crush it beneath the Empire’s heel. The Lothal Resistance has arisen to fight back against this tyrannical oppression, and now it’s your turn to answer the call!

Fantasy Flight Games is proud to announce Tyrants of Lothal, a new expansion for Imperial Assault, available for pre-order now from your local retailer! Tyrants of Lothal is not releasing alone either, so be sure to also pre-order the Ezra Bridger and Kanan Jarrus Ally Pack, the Sabine Wren and Zeb Orrelios Ally Pack, the Thrawn Villain Pack, and the Hondo Ohnaka Villain Pack to upgrade your Imperial Assault experience! You can find out more information about these additional figure packs here.

Tyrants of Lothal introduces new heroes, enemies, allies, map tiles and a six-part mini-campaign for Imperial Assault, the strategy game of epic missions and thrilling combat. These components bring the planet of Lothal to life and give you the oppurtunity to join the burgeoning Rebel Alliance. Whether it’s in a campaign or skirmish game, the fate of the Rebellion rests on your shoulders… but you’re not alone. Join the crew of the Ghost from Star Wars Rebels in your epic fight against Grand Admiral Thrawn, your dealings with the shifty pirate Hondo Ohnaka, and your mission to take down the tyrants of Lothal!

The legends that these heroes forge are now yours to play. The Legends of the Alliance companion app for Imperial Assault is now available for download from the App Store, Steam or Google Play!

Across the galaxy, the Empire chokes out the last fires of the Republic, smothering freedom wherever they can find it. Yet a noble Rebellion has arisen to combat the Empire, and new heroes are born every day—entering the ranks of the Rebel Alliance and doing their utmost as pilots, soldiers, saboteurs, and diplomats to bring the Emperor’s tyrannical reign to an end.

With the Legends of the Alliance companion app, you have the chance to unite with all of your friends in a cooperative campaign. The Legends of the Alliance app takes over all of the functions once performed by the Imperial player, freeing you to experience entirely new campaigns in a fully cooperative environment with your friends as you fight side by side against the Galactic Empire!

The Nal Hutta Swamps Skirmish Map for Star Wars Imperial Assault is now available for order at your local retailer and from Fantasy Flight Games.

The Nal Hutta Swamps Skirmish Map is now entering the tournament rotation for Imperial Assault, and this neoprene playmat offers an ideal play surface, depositing you and your skirmish force atop the planet’s bogs. Measuring 26” by 26”, this playmat features the entire map printed directly onto its surface, ensuring that your setup never takes more than seconds.

To further facilitate your play, there’s plenty of room around the borders of the gamemat for you to set up your Deployment cards and tokens, as well as handy references for each team’s starting setup zones. You’ll even find additional copies of the Nal Hutta Swamps cards, giving you everything you need for the definitive Imperial Assaultskirmish experience.

Finally, the gamemat evokes the spirit of Nal Hutta with evocative artwork of two of the mercenaries who might have dealings there. On one side, you’ll find the infamous bounty hunter Boba Fett, ready to pursue any target the Hutts might name. Across from him, a battle-scarred Rodian seeks to make his own name with his blasters and his wits.

There’s almost no limit to what the droids of the Star Wars universe can do. They can walk and talk and think. They can be loyal. They can be treacherous. Sometimes, they may even be grumpy and cantankerous.

In one sense, they share hard limitations imposed upon them by their parts and their programming. But in another sense, they’re limited only by the imaginations of their creators. And this means that, just like the galaxy’s organic sentients, droids can play an astonishing array of roles—assassins or astromechs, medics or translators, heroes or villains.

And with the three new Ally and Villain Packs now available at your local retailer, you can explore more of these droids and their roles in your games of Imperial Assault!

Three powerful Force users… and not a single Jedi among them.

Fantasy Flight Games is proud to announce the upcoming release of two new Villain Packs and one new Ally Pack for Imperial Assault!

In the city where the Jedi Council once sat high enough above ground level to soak up the sun’s fading light, there are no more Jedi. The galaxy’s former self-appointed guardians have been swept aside by Order 66, and Emperor Palpatine has established an order of Inquisitors to hunt down and destroy any who still remain. Even those who simply demonstrated a sensitivity to the Force were at risk of being targeted, and many were captured and sent to a secret installation on planet Arkanis as part of Project Harvester.

As a result, the Jedi have all but ceased to exist, and they have faded even in the minds of the galaxy’s citizens, many of whom now view the Force as some “hokey religion.” But there are still some who can feel the Force and draw upon its strength. Some still seek to use its power to defend themselves and those around them. Others choose to wield the Force like a weapon that they can direct at their enemies. And when there are rumors leading toward an artifact that may enhance these individuals’ abilities to use the Force, you’ll find three of the most powerful of them ready to chase after those leads among the streets of Coruscant.

Together, these Ally and Villain Packs introduce three highly detailed figures for Maul, Emperor Palpatine, and Ahsoka Tano that you can use to replace their tokens in your Heart of the Empire campaign. Plus, they introduce brand-new missions for your campaign games and skirmishes, plus all the Deployment cards, Command cards, and Agenda cards you need to explore new Force-centered tactics in every mode of play.

Coruscant, capital of the galaxy. This globe-spanning metropolis is the home of Emperor Palpatine and countless other beings. It is also the home of countless mysteries, including the location of an ancient artifact of incredible importance…

Fantasy Flight Games is proud to announce the upcoming release of Heart of the Empire, a new expansion for Imperial Assault!

Adventure among the awesome Coruscant cityscape, and face its myriad dangers. Only the bravest rebels dare to operate here, but when it becomes vital to locate an ancient artifact before the Emperor can claim it as his own, you’ll set forth on a new, highly replayable campaign of sixteen missions that explore every level of the world, from its glistening halls of power to its grimy underworld alleys.

You’ll find three new heroes ready to join the Rebellion, aided by the talented Force user Ahsoka Tano. You’ll maneuver through the crowded city, pursued and confronted by Imperials at every turn. And you’ll find the Emperor isn’t the only major player working against you. The former Sith, Maul, has sent a Clawdite Shapeshifter to pursue the artifact, and any face in the crowd might hide the Shapeshifter’s true identity. 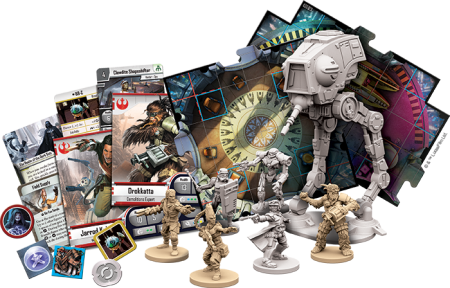 Altogether, Heart of the Empire expands your campaign and skirmish games with three heroes and thirteen other figures, including the massive AT-DP, baton-wielding Riot Troopers, and twin-gunned Sentry Droids. Coruscant comes to life with dozens of new map tiles and more than 130 cards. New energy shield and rubble tokens will throw a wrench in your opponent’s plans by modifying the battlefield, and new power tokens give you more control over your fate than ever before!

As the Jabba’s Palace Skirmish Map enters the tournament rotation for Imperial Assault, there’s no better way for you to experience these battles than with this neoprene playmat.

Measuring 26” by 26”, this play mat portrays the tangled corridors, Jabba’s throne room, and the rancor pit printed directly onto the mat, ensuring that your setup will never take more than a few moments.

Once your match begins, you’ll soon find that the spacious borders around the map give you plenty of room to place your Deployment cards, Command deck, and tokens, while keeping them out of the way of the action. The Jabba’s Palace Skirmish Map even includes extra copies of the Skirmish cards for this map’s missions, providing you with a quick and easy reference to objectives, special rules, and setup zones.