Duty above all else. This is the creed of the Scorpion, and it has served them well. Slowly gathering power over the decades, the Emerald Empire’s most deceptive clan found themselves in the spotlight of Otosan Uchi. Now, as the Empire is thrown into chaos, it falls to the ever-loyal Scorpion Clan to hold Rokugan together, and once more put themselves in the spotlight.

Fantasy Flight Games is proud to announce Shoju’s Duty, the final dynasty pack in the Inheritance cycle for Legend of the Five Rings: The Card Game!

Shoju’s Duty introduces a new version of the Scorpion Clan Champion, as well as new tools for every Great Clan to find their place in the new order of Rokugan. 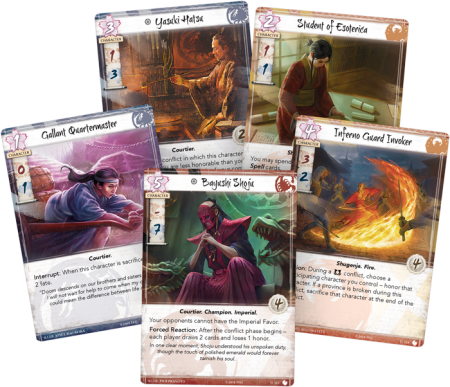 Duty courses through the veins of the Crab and Scorpion. But as these clans face the greatest challenge of their lives, will they do what must be done for the good of the Empire? Will Bayushi Shoju fulfill his duty, and will he be able to hold the Empire together?

Discover the end of the Inheritance cycle with Shoju’s Duty (L5C24), available now for pre-order from Fantasy Flight Games

Fantasy Flight Games is proud to announce The Knotted Tails (6.0 MB), a new scenario to accompany the Mask of the Oni adventure for the Legend of the Five Rings Roleplaying Game, is now available for download!

What foul creature hunts for nezumi blood in the Shadowlands?

As your band of samurai travels through the deadly, twisting landscape of the Shadowlands, they encounter a patrol of the strange, rat-like beings known as nezumi. The scouts describe a monster who hunts their tribe and they plead with you for help. Now, you must make a difficult decision—do you aid the unfortunate creatures, or destroy the scouts and continue on your journey toward Shiro Hiruma?

The Knotted Tails offers an additional story for Mask of the Oni, the adventure book based on the rich worldbuilding material found in the Shadowlands sourcebook. The Mask of the Oni adventure pits you against the dangers of the Shadowlands on a mission to the ruins of the Hiruma family’s once-proud castle. As you follow the trail of a deadly master of blood magic, you face incredible dangers, both in the twisted land and in your own mind. Now in the heart of Fu Leng’s domain, this new tale offers you a brief reprieve from the otherworldly horrors and gives you the chance to help some fellow unfortunate souls while you continue your journey to Shiro Hiruma.

All and Nothing, the fifth Dynasty Pack in the Elemental Cycle for Legend of the Five Rings: The Card Game is available now from Fantasy Flight Games!

Within the All and Nothing Dynasty Pack, you’ll find a new exploration of the Void element, as well as the introduction of several unique characters, expanding on the themes of their clans found throughout the Elemental Cycle. A new Commander, Monk, and Meish?d? wielder enhance new strategies for the Lion, Dragon, and Unicorn Clans, opening up new paths to victory.