WizKids will be releasing Magic: The Gathering: Heroes of Dominaria, their new board game set in the iconic land of Dominaria in both a standard and premium version.

In this Eurogame designed for 2 to 4 players, explore Magic’s most iconic plane and experience the trials and tribulations of being a heroic force on Dominaria. Visit storied locations such as Llanowar, Urborg, and Keld. Draw mana from the world to power abilities and recruit heroes to aid in quests. Discover powerful artifacts and create leylines to draw even more mana from distant lands. Build sites to increase your bond with a location. The land of Dominaria is filled with adventure and excitement! In true Eurogame fashion, use strategy to score the most victory points and emerge victorious.

The Premium edition includes 4 fully-painted miniatures in addition to all of the content included in the standard edition.

Just released by Wizards of the Coast, Explorers of Ixalan is a multiplayer Magic: The Gathering game with a board component.

Play as one one of four rival tribes: Vampires, Pirates, Merfolk, or Dinosaurs, each with a custom card deck. Defend the city against your opponents and claim dominion over Ixalan!

Explore the tile-based map, uncovering bonuses that will swing the tide of battle in your favor! Explorers of Ixalan is a multiplayer free-for-all battle, so don’t let your opponents conquer your site tiles! These map tiles bring the game to different locations across Ixalan each granting unique bonuses. The inner jungles of Ixalan conceal many powerful secrets! 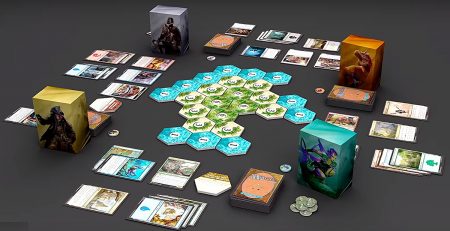 What can you do with your Mythic Rare Magic: the Gathering card that was just banned from tournament play? White Wizard Games recommends you send them that no longer valid card to them in exchange for a free copy of Epic Card Game.

When Wizards of the Coast announced a new list of banned and restricted cards from Standard play on January 9th, Rob Dougherty and Darwin Kastle of White Wizard Games — both Magic the Gathering Pro Tour Champions and inductees into the Magic Pro Tour Hall of Fame — decided to offer an exchange deal for two of the rare cards banned from play. Emrakul, the Promised End, a mythic rare card which sold for around $20 was banned for being too “scarily powerful”, facing little resistance and ending games too quickly. “She was the world-ending, all-powerful monster she was in the story, which was too much for Standard,” reads the announcement from Wizards of the Coast. Smuggler’s Copter, a rare card that sold for about $10, was banned because it “shows up in too many decks, diminishing the format’s diversity,” according to WotC.

Brazilian players who purchased a copy of any of the banned cards between December 10th and January 9th at Bazar de Bagdá, one of Brazil’s largest MtG game stores, may return those cards to the store and be refunded in store credit. Willy Edel, owner of Bazar de Bagdá, is also a Pro Tour Player and in the Magic the Gathering Hall of Fame.

Magic: The Gathering – Puzzle Quest gets a brand new update (v1.5.8) for both Apple and Google Play users.

In this update, the highly anticipated PVP Events will finally make its way to Magic: The Gathering – Puzzle Quest. The Nodes of Power PVP event has commenced and runs for 48 hours, twice a week.

Hasbro announced a new Magic: The Gathering Arena of the Planeswalkers game: Shadows Over Innistrad will be available August 1st.

Unlike the recent Battle for Zendikar expansion, the new Shadows Over Innistrad can function as both an expansion to the existing base game or a stand alone board game by itself. According to an image which we received from Hasbro:

Take a step outside time with Eternal Masters. This exciting set lets you draw on some of the most sought-after cards from throughout the history of Magic—some with new artwork—to enhance your Cube or your favorite Commander, Vintage, and Legacy decks.

Eternal Masters for Magic: The Gathering from Wizards of the Coast is designed to be a unique and enjoyable Draft experience, much like Modern Masters. It will not contain cards from the Reserved List, but it will feature many exciting Eternal staples, including:

Magic: The Gathering – Puzzle Quest is now available for your smart-phone.

MATCH AND CAST SPELLS
Match gems to collect mana and unleash a powerful arsenal of spells against your enemies. Wage match-3 war against a legion of worthy foes as you battle your way across the Multiverse.

OUTTHINK YOUR RIVALS
Test your skills as you craft the perfect deck and climb to the top of the leaderboards in competitive player-versus-player combat! Prepare and strategize what creatures and spells are needed to overcome an ever-growing collection of single player challenges.

CUSTOMIZE YOUR SPELLBOOK
Build a worthy deck and battle some of Magic: The Gathering’s most deadly forces. Powerful spells such as Tragic Arrogance or ferocious creatures like Avaricious Dragon await combat on the match-3 battlefield.

RECRUIT ALLIES
Choose the most powerful Planeswalkers in the Multiverse and build a deck worthy of these formidable mages. Stay several steps ahead of your enemy with Jace, the master of deception or unleash the explosive fury of Chandra, the pyromantic fire mage.

UNLEASH YOUR PLANESWALKER
Use your Planeswalker’s unique abilities like Chandra’s Flameshot to annihilate your enemies, or Liliana’s Necromancy to raise the dead. Level up your Planeswalker and spells to crush your foes

We already knew that we were getting two new Planewalkers, one being multicolored, in January with the Battle for Zendikar expansion for Arena of the Planeswalkers. Now Wizards of the Coast and Hasbro have announced that the expansion will come with a new Battlefield scenario that pits the players against a colorless Eldrazi Ruiner controlled by another player.

This expansion pack introduces 2 additional Planeswalkers, including the first multi-color Planeswalker, Kiora, who can field both green and blue colored creatures and spells. Also included is the first hero creature, the terrifying Eldrazi Ruiner. The Eldrazi are colorless creatures and can be summoned by a Planeswalker of any color.

On top of that they are including a new 1 player vs. many battlefield scenario in which players fight against the massive Eldrazi Ruiner to save Zendikar. 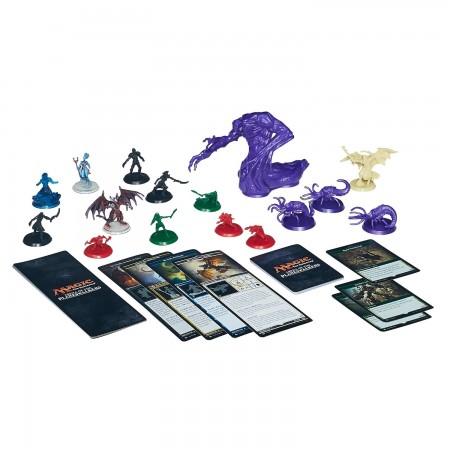