In this party game, 2-7 players compete to find money and an ID that will convince the cops of their innocence. The game is played using an actual wallet with multiple pockets and zippered areas that allow players both to take game cards and put them back, as they try to improve their own chances at victory and lead their opponents into traps. Each fast-paced round lasts only 10 minutes, and an entire match is over in just 30 minutes.

“Wallet is a party game in the truest sense: easy-to-learn, fast, filled with surprises, and loads of fun!” commented Adam Sblendorio, Vice President of Creative at Cryptozoic. “We think players will have a great time reaching into the wallet to find currencies from around the world and the IDs of colorful characters. And when they’re done playing, the whole game can be stored right in the wallet!”

The objective in Wallet to collect as many Victory Points as possible by being the richest innocent player at the end of each round. A player is normally declared innocent if he or she has exactly one ID, no more than 500 currency units (CU), and no more than two types of currencies at the end of the round. However, some cards and IDs alter these conditions by adding various restrictions and bonuses.

During a turn, a player can perform one of the following actions: take a card from the wallet,  put a card from his or her hand in the wallet, buy an ID, or flip an Hourglass card. A round is over when all six Hourglass cards are flipped. At the end of the third round, the player with the most Victory Points is declared the winner.

Cryptozoic Entertainment and Rooster Teeth announced a partnership to release Million Dollars, But… The Game in July.

Based on Rooster Teeth’s wildly popular series Million Dollars, But…, the addictive, easy-to-learn game has players put their morals and imagination to the test, posing the question, “What would you do for a million dollars?” After a successful Kickstarter campaign in 2016 that earned over $1 million, the game has been sold online and received a limited retail release. The partnership between Cryptozoic and Rooster Teeth will result in a much wider release for Million Dollars, But… The Game, making it available at hobby stores and other retailers nationwide.

In Million Dollars, But… The Game, 2-6 players (or more) each take four black Trigger Cards and four gold Rule Cards at the start of every round. After one player is chosen as the judge, the other players each create a scenario—using one Trigger and one Rule card—that proposes a situation in which someone gets a million dollars, but must do something distasteful in return. The judge reads these scenarios aloud and, then, the other players glorify or downplay the various scenarios. The winner of the round is the player who creates the scenario that the judge decides he or she would not do. The overall winner is the first player to win five rounds.

Million Dollars, But… The Game will be available at retailers nationwide in July for a suggested retail price of $25.

We’re all too familiar with reaching that phase in a friendship when courtesy becomes a thing of the past and true colors start to show. Conversations get more personal, off-color remarks aren’t off-limits, and soon you’re finding yourself wondering just what lines you can and can’t cross with the people you’re close to (or so you thought).

At the next big get-together, you won’t have to wonder how to go about broaching those taboo topics. Learn the s#!t you’ve always wanted to know, but were too afraid to ask when you’re finally able to get your hands on Privacy from USAOpoly!

Your excuse for being intrusive is just around the corner in this upcoming party game for adults only! Prepare to pose the most outrageous questions to your peers about their personal habits, boundaries, and secrets… and then try to guess the outcome! “Yes” or “No” answer tokens are placed secretively into a closed ballot box. Correctly predict how many people said “Yes” to up to 400 barefaced questions to earn the most points and win!

Identities remain anonymous unless you can narrow down who said what. Dare to make it a rite of passage with anyone from new acquaintances to co-workers who get the best of your curiosity!

There are werewolves among us! We’ll stab each other, heal each other, and try to avoid getting bitten, but when a human receives their third bite, they secretly become a wolf and turn against us! When a Night card shows up, players anonymously pass cards to their neighbors, and that’s how werewolves can strike in secret. Humans need at least one human to survive at the end of the third night to warn other villages of the werewolf outbreak.

“My goal with GROWL is not to supplant Werewolf or One Night Ultimate Werewolf, or The Resistance, or Secret Hitler. My goal is to make something totally different that solves major problems with the social deduction genre.” – Joey Vigour (designer of Chaosmos and GROWL)

SOCIAL DEDUCTION GAMES:
• Often require either a moderator or phone app to “host” the game
• Can take an hour to play or more.
• Require large groups of players
• Suffer from the “alpha gamer problem” where the loudest players often take charge
• Usually don’t work well if both experienced and casual players are in the same game

GROWL:
• No moderator or app
• 15 minute playtime, regardless of the number of players
• Everyone gets to bite, stab, heal, and give gold, so all players have power not just the loud people
• Takes only 5 minutes to learn, and works with all kinds of players together

Today, Jellybean Games announced the launch of the Show & Tile Kickstarter, a new game from the designers of Seikatsu.

Show & Tile is a party game for 3-6 players, suitable for all ages! Each player takes two sets of tangram tiles, picks a word, and starts building. At the end of 90 seconds, put your tiles down and try to guess everyone’s words!

Can’t draw? No problem! Tangrams have been around for centuries, and can be used to construct anything you can imagine!

“Ever since I was 8 years old I’ve been fascinated by Tangrams,” said Isaac Shalev. “For someone who can’t draw, being able to create visually feels amazing. Show & Tile is a joyous game about sharing your creativity and I can’t wait to show it to you!”

“When Isaac first showed me this game, I kept coming back to play it again and again,” said publisher Peter C. Hayward. “I must have played it hundreds of times by now, but I’m still discovering new ways to convey ideas. Everyone I play with bring something different to the game!”

As with all Jellybean Games, the rules are straightforward and easy to learn. Players simultaneously create images out of tangrams, and then try to guess what everyone else has made. Extra points are awarded to players who tackle harder words – the fun comes from the challenge of trying to represent simple objects in a restricted way.

The game contains twelve double-sided sets of tangrams, a mat for each player, a sand timer, a scorepad, and a deck of more than three hundred words. Show & Tile is for 3-6 players aged 8+, and will launch on Kickstarter on the 30th of January, 2018 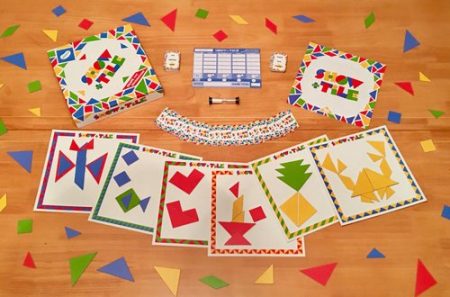 Word Mines is a spastic word-guessing party game with a ‘hilarious and raunchy edge’ (kind of an adult version of Taboo). Everyone is bound to learn a new word or two – it’s educational! And, it’s available to purchase now direct from the publisher.

Drinkagon is a board game for up to 6 players that combines drinking and strategic thinking. You have to carefully plan your moves and find the shortest possible way to conquer your opponent’s base. You need to use tactics and strategy in order to stay sober and try not to step on the green (TRUTH) or red (DARE) fields. You move your figurines with unique 3D printed D12 dice.

To spice up the game you can use your moves to move your opponent’s’ figurines far from their victory. Make them lose, answer tricky questions and do crazy challenges, or just get them drunk.

There is a free iOS & Android app with hundreds of truth & dare cards which makes the game “surprising and endlessly fun”.

Put your thinking cap on and prepare to have your brain bent. Braintopia, the fast-paced game testing your mental focus, flexibility, and speed is available now at your local retailer!

Braintopia is a simple game that will test your skills of observation, quick thinking, and coordination. The game is made up of eight fast-paced challenges that will keep you on your toes as you race to refocus your mind and solve each puzzle before your opponents. As you and up to five other players proceed through the challenge deck, you will collect the cards you have answered both accurately and most quickly. A correctly identified tactile card or a pair of any other challenge card will earn you a piece of the brain. The first player to four brain pieces wins the game!