I guess “Patchwork” is proof that you can make a board game about just anything! Caroline bought this little  game a while ago while scouting our local hobby store for 2-player games. I laughed when I saw the box, but the game turned out to be quite fun in all its simplicity and I would rate it among the better 2-player games in our collection.

Patchwork is a resource and time management game with elements of Tetris to it. The goal of the game is to finish a quilt, and have as few empty spaces on your quilt-board as possible. Points are scored for having the least amount of empty spaces and the number of buttons (game currency) in your possession once both players reach the end of the game.

The game has no fixed number of turns, instead the main board is divided into “time spaces”. During each players turn, you pick one of the three available patches in front of the turn token – pay the number of buttons the patch indicates and place it on your quilt.

The patches available have several things printed on them. First you see the price (in buttons), you also see how time consuming it is to apply the patch to  your quilt, and finally you see how many buttons the patch generates whenever your player token crosses a button printed on the main board. 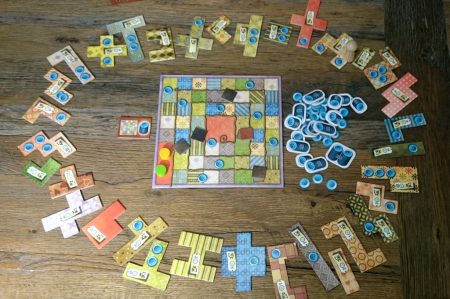 What I liked about this game is the non-linear player activation. Players alter turns only once one player falls behind the other. If player one is 5 steps ahead of player two, then player two can buy and place several patches on his quilt before catching up and pass by the leading player before player turn changes.

Patches with buttons printed on them provide resources for purchase of new patches, and every time you pass a button symbol on the main board you receive a payout from the buttons on your quilt.

Should you lack buttons to purchase new patches you can pass your turn over to the other player, doing so you advance your own player token on the time track so that it ends up just in front of the other player, then you get 1 button for every space your token moved. Thus you receive “money” for future moves but forfeit your current turn. 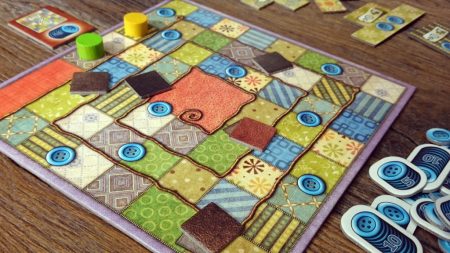 There is not much more to tell about this game or worth dissecting. The rules are dead simple, but offer quite a challenge between two equal players trying to both outwit each other with tactical choices.

I really recommend this game if you are looking for a easy to learn, quick to play 2-player game. I would also consider this very family/kid friendly