Lanterns Dice: Lights in the Sky, the sequel/spin-off of the hit seller Lanterns: The Harvest Festival is available for pre-order from Renegade Games and expected to release in May!

The harvest is in, and now it’s time to celebrate! The emperor has declared that this shall be the best harvest festival yet. Players act as artisans, decorating the palace lake with floating lanterns and launching fireworks to light up the sky. The player who earns the most honor will make the best impression on the emperor and win the game.

Roll dice and choose which colored lanterns players can fill in on their scoresheets.

Cover completed shapes with fireworks tiles to score points and put on a spectacular show!

Renegade Games has released the new Deluxe Edition of their hit seller, Arboretum.

Nowhere is nature’s beauty quite so evident as in the resplendent colors of an arboretum. In Arboretum, you create carefully planned paths for your visitors to walk as they take in the colorful explosion of buds and leaves. The cheerful cherry blossom, the fragrant dogwood, the mighty oak – all have a place in this peaceful haven. But the tranquil setting belies the game’s competitive heart. You must choose which cards to plant in your arboretum and which to keep in hand, as only the most expert curator will win the renown of nature enthusiasts everywhere.

At the intersection of the most well-traveled trade routes in the old world lies a city within rose-colored cliffs. A place where caravans miles long enter the city, through a narrow canyon called “the Siq.” Inside, traders from faraway lands find shelter and a place to trade their wares among the stunning buildings carved into towering red rocks. This is Petra, and never before or since has there been a city quite like it.

In Passing Through Petra, you are a powerful citizen growing your settlement and your reputation. As caravans pass through the canyons, you’ll welcome traders into your market and facilitate trade with those looking to get their hands on valuable wares. Use these transactions to spread your influence and gain unique benefits to grow your economic engine. Spread your influence the quickest to become the most powerful leader in Petra! 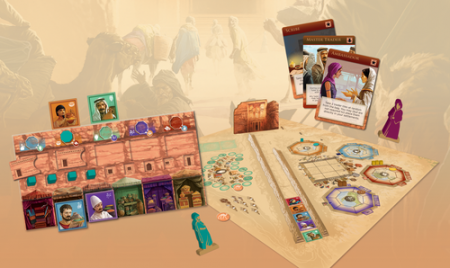 Renegade Games has announced the August release of Wendake.

“Wendake” is the name that the Wyandot People use for their traditional territory. This population, also known as the Huron Nation, lived in the Great Lakes region together with the Iroquois, Shawnee, Potomac, Seneca, and many others. In this game, you explore the traditions and everyday life of these tribes during the 1756-1763 period when the Seven Years War between the French and the English took place in these territories.

But this white man’s war is really only a marginal aspect of the game; the focus is on life in the Native villages, fields, and forests. In this game, you won’t find the traditional teepees since those were used by southwestern tribes who moved their camps to follow the herds of buffalo. The Natives of the Great Lakes were sedentary, living in long houses. The women farmed beans, corn, and pumpkins, while men hunted beavers in the forests, mainly to sell their pelts as leather.

In the game Wendake, you are placed in the shoes of a chief of a Native American tribe. You have to manage all of the most important aspects of their lives, earning points on the economic, military, ritual, and mask tracks.

The core of the game is the action selection mechanism: You have the opportunity to choose better and better actions over seven game rounds, and the winner will be the player who can find the best combinations of actions and use them to lead their tribe to prosperity.