Dice Masters Fans! The Marvel Dice Masters: Iron Man and War Machine Starter Set is coming soon, and they have got some exciting previews of what cards you’ll see!

Today we’ll be looking at three cards with the brand new Suit Up keyword!

When Tony Stark wants to suit up with his armor, he doesn’t have to wait, and now neither do you! When you purchase a character die with the Suit Up keyword, you can immediately field it on its level two side if you KO another character die that matches its keyword.

Iron Spider: Waldoes is a great example. If you have a Spider-Man die in the field, you don’t have to wait to pack a punch with his 4 attack on his level two side. Just KO the Spider-Man die and immediately field your Iron Spider!

Need quick access to a character with the Fast keyword? Then War Machine: JRXL-1000 is the character for you. James Rhodes won’t mind if Iron Man borrows the armor he made for Rhodey. Suit up Iron Man in Rhodey’s “Fast”er armor by KO’ing an Iron Man die after purchasing War Machine for superior combat abilities. 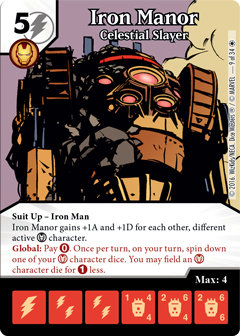 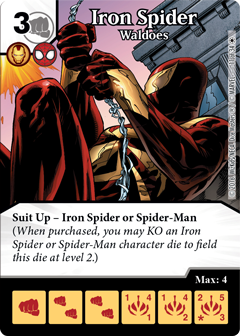 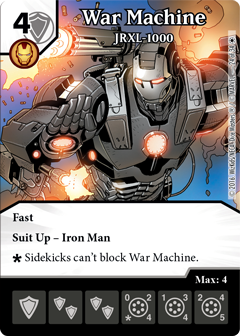 These are just a few of the suits Tony Stark made that will be available with the Suit Up ability. Find out what the rest are in the Marvel Dice Masters: Iron Man and War Machine Starter Set!

Suit Up, a light Euro style game is coming to Kickstarter on February 4th from Val Teixeira.

Suit Up uses a blend of Worker Placement and Rondel mechanics and is the smaller, nimbler cousin of games like Lords of Waterdeep and Istanbul. The game, which fits into a box no bigger than three Blu-ray cases, is truly a big box game in a tiny frame.

The Kickstarter campaign will feature the game for $29, U.S. shipping included ($10 shipping to UK, EU, Canada and Australia). Backers can choose higher pledge levels to have a card or game player created in their likeness.

In Suit Up, you will play a fine young professional in a challenge to see who is the best and most socially connected of their group. But making numerous friends on short notice won’t be easy. Only the savviest will discern the prime places to charm influential people and forge fantastic friendships before others steal their attention. Will you make the most out of this challenge? Will you earn the envy of your competitors by building a supreme group of friends?

Every game will lay out a different town for you to move around in, gather influence and make new friends. With a large range of variety from the setup to the end, every game will have its own path to victory. To be successful at the game, you must learn to strategically move around the town, collect the right kinds of resources while you block off locations from the other players. To master the game, you must also know which friends to make and when. They will help you gather more resources, give you the highest score and secure the end game scoring conditions.

What role will you play in this contest? Do you have what it takes to out-smart your opponents and achieve social success? Well, then, Suit Up, get out there, and prove it.