The weird war of 1947 envelops more of Europe as the Italians split to join both Axis and Allied forces. Plus new weaponry is introduced in the brand new supplement, Defiance, to take your Konflikt ’47 games to a whole new level!

This book is the second supplement for Konflikt ’47 and seeks to expand the game’s boundaries further by introducing more units, forces and army build options. The largest section of this supplement introduces the divided nation of Italy, with the forces of the Royalist Co-Belligerent Italian Army (Eserciti Cobelligerante Italiano or ECI), fighting their former allies, the German Wehrmacht. Mussolini’s remaining forces, the Fascist National Republican Army (Esercito Nazionale Repubblicano or ENR) hold the north of the country propped-up by the German military machine. As in the previous supplement, we have looked at some of the existing rules that needed refinement, and have introduced further rules to allow the use of more elite and specialised units. Players of the existing five core armies will also find something new for them as well, with each nation getting some new units from their respective Rift-tech laboratories.

The book is divided into four sections, the first covers the new rules and errata, as well as the rules for national variations on the standard Reinforced Platoon structures in Konflikt ’47. The second introduces the fractured nation of Italy, with both some expanded history and the details of its forces. Then we turn to the new units of the existing nations before the final section presents additional information on the Konflikt ’47 setting, including a small mini-campaign that is set firmly in the Konflikt ’47 alternate history.

Announcing the second full release for Ironwatch Games, we’re proud to bring you Mawbeast Madness, from the mind of Glenn Allan!

Featuring all the high-adrenaline excitement of racing combined with the temperamental and homicidal Mawbeast nature pitted against the devious cunning of Goblins, Mawbest Madness uses the Dungeon Saga rules as a base to enable you to race your friends and enemies around underground tombs, forgotten lairs, and forsaken ruins! Use hidden passages to zip across shortcuts, pick up items to improve your own odds and impede your opponent, and of course get into good old-fashioned brawls along the way.

Featuring custom cover art from Boris Samec, this short-but-sweet rules supplement is a must-have for those seeking to throw down a checkered flag of challenge at your next tabletop wargame session!

HARP Loot – continue your journey on the new road to High Adventure.

Loot, that wonderful, glittery, magical stuff that brings a gleam to an adventurer’s eye and makes his heart beat a little faster. What is it and where do you find it? What do you do when your loot breaks? How do you convert your loot to cash? What is the coolest, newest, hottest and best loot around? This book has all the answers.

Can’t lay your hands on the loot you need? No Problem—just make it. Loot explores the myriad ways of creating the magic items so near and dear to our hearts.

The book includes, but is not limited to, rules for:

Drawing upon years of actual play from the fan base, HARP Loot is an enhanced version of the original HARP supplement published in 2005.

Fantasy Flight Games is proud to announce Chronicles of the Gatekeeper, an adventure supplement for the Star Wars®: Force and Destiny™ roleplaying game.

It is a dark time for those strong in the Force. Lacking the Jedi Order to guide them, Force-sensitives wander the galaxy, persecuted by the Empire and vulnerable to the lure of the dark side, searching for the remnants of Jedi teaching that are scattered across the stars. In Chronicles of the Gatekeeper, the holocron of a mysterious, vanished Jedi Knight surfaces. Its Gatekeeper offers to instruct you in an incredible Force power, if you’re willing to follow where the holocron leads. But great power is always a double-edged blade, and this power is great enough to corrupt even the most stalwart soul.

This 96-page, beautifully illustrated book introduces locations throughout the Star Wars galaxy, a new playable species, and a wide range of adversaries from local matriarchs and Clone Wars-era droids to sadistic criminals and vicious wild beasts. Designed to be used with the Force and Destiny roleplaying game, Chronicles of the Gatekeeper can also easily be integrated into an Age of Rebellion™ or Edge of the Empire™ campaign so that players can explore the theme of the Force, or so that Force-sensitive characters can develop their abilities.

Warlord Games is taking orders for their new Black Powder supplement, Blood on the Nile.  Blood on the Nile charts the Mahdist revolt in the Sudan, the long march of the British to relieve the besieged city of Khartoum, and the campaign to reconquer the country.

The Mahdi had emerged from the wilderness to lead a rebellion against the Egyptian government in Sudan. His armies overwhelmed the Egyptians and trapped Governor Gordon in Khartoum. The British launched a relief expedition, but it arrived too late. Such an insult to the Empire could not go unpunished, and the British returned to crush the Mahdists. Sudan then came under British Imperial control, but, like shifting sands, history could have turned out very differently.

Using this Black Powder supplement, you can take charge of the British army fighting in the desert, or assume command of the Mahdi’s forces in their struggle against the world’s greatest military power. Along the way, learn about the battles and campaigns of the Mahdist Wars, and the soldiers who served in them.

Like all of Warlord’s rulebooks, Blood on the Nile comes with a free exclusive miniature when you buy direct from us. Colonel Frederick Gustavus Burnaby was an eccentric British officer and gentleman, with a fondness for hot air balloons, who fought in the Sudan, was wounded at El Teb and was eventually killed at the Battle of Abu Klea 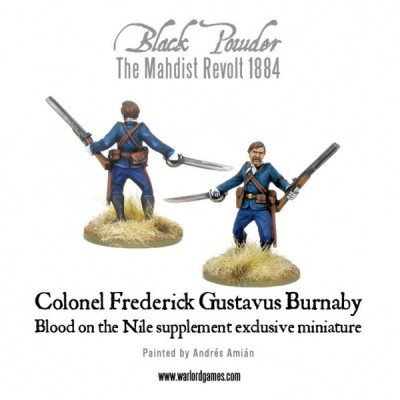 LPJ Design is running a Kickstarter campaign for Cross of Fire, a new adventure path for Pathfinder.

The Cross of Fire Saga adventure path is a post-apocalyptic survival horror adventure for the Obsidian Apocalypse table top RPG campaign setting for the Pathfinder RPG. The Cross of Fire Saga Adventure Path is the first adventure path for Obsidian Apocalypse, which was released in 2013, as the premiere setting for the post-apocalyptic survival horror genre for Pathfinder. The reason that we are having this Kickstarter project is to generate the funds we need to pay for the cost of development, writing, artwork and printing this adventure path and getting it out to the premiere retail gaming stores.

The soon-to-be released Bolt Action: Tank War book is the first of a new generation of supplements for Bolt Action. As the ‘Armies of’ series is now complete with Italy and the Axis, the following books will expand the ways you can play the game, as well as helping you to give more historical depth to your armies.

Tank War, as the name kind of implies, deals with tanks, tanks and more tanks. It is packed full of all manner of fun and interesting tank-related rules and information, and in this article I’m going to explain what you’re going to find in each section in a little bit more detail than it has been done up to now.

END_OF_DOCUMENT_TOKEN_TO_BE_REPLACED

Battlefront has shown off a preview of their upcoming Flames of War supplement, Bridge at Remagen.

The US Army is charging for the Rhine, the last physical barrier to the German heartland. Leading the march of the US First Army is Combat Command B of the 9th Armored Division. The Rhine has always been the objective, but no one expects the Germans to leave any of the bridges across the river intact.

On 7 March 1945, lead elements of Task Force Engeman discover that Remagen’s Ludendorff Bridge is still intact, and Brigadier General Hoge instantly recognises that a decisive battle is upon his troops. He orders the bridge to be captured.

Meanwhile, Major Hans Scheller, commander of the German defenders, gives the order for the bridge to be demolished. As the first American soldiers set foot on the bridge, it explodes in a massive plume of smoke and debris. After the dust settles, everyone is stunned to find the bridge still stands.

The fight for the Ruhr is on…