Up until now, we know you’ve seen quite a bit. The horrors you faced in Estrella Drive were almost unspeakable. But you’ve proven yourselves capable of handling quite nearly anything—which is why we know you’re up to this next assignment. Now let’s get to the good part: you’ll be traveling to the year 1685, crossing the high seas of the Caribbean during the Golden Age of piracy. I hope one of you knows how to sail…

We’ve tried to keep this blunder under wraps, but the situation has gone beyond our control, which is the exact reason we’re sending you, agents. Some time ago, four seasoned agents, just like yourselves, were sent to this timeline. Unfortunately, something went awry, and we’ve lost their trace. It’s up to you to track them down and… release them from their receptacles. More details on that at a later date. We’ve seen the way you handle yourselves in the field, and believe you possess the exact skills we need to bring these agents home.

Estrella Drive is now available for T.I.M.E. Stories from Asmodee.

In Hollywood, the ghosts of the past never sleep! Embark on your next adventure into the past with Estrella Drive, the sixth expansion for T.I.M.E Stories. Like all T.I.M.E Stories adventures, you and your fellow players are members of the T.I.M.E Agency, sent to investigate a disruption to the Time Stream. This time, you and your fellow agents are sent to 1982 to investigate a temporal anomaly in a supposedly haunted Hollywood mansion. Please note that Estrella Drive is recommended for mature audiences—certain themes within this adventure may be objectionable to younger players.

Welcome back, agents. Don’t mind the confetti, I’m just getting you in the spirit for your next mission. Take your seats, time is valuable, and you could be embarking on your next mission as early as today—the mission we’ve codenamed Estrella Drive.

You’ve been briefed on the destination of this mission—1980’s Hollywood—and also your objective. Prepare for everything that comes with this setting: partying, loose morals, and other… “adult” content. Once again, agents, I cannot stress this enough—Estrella Drive is meant for mature audiences only. Those not of age should stay back at HQ.

The objective of your mission is to simply observe the temporal loop located in this time period. We aren’t looking to close this loop, merely gain knowledge from it. We’re certain that this mission in particular will prove to be key in studying the complex behaviors Time exhibits.

Through our briefings, we at the agency have worked hard to familiarize you with some of the far out (did I use that right?) receptacles that you can choose to inhabit during your mission. Each of the different receptacles has a particular skill set that might aid you in their own unique way. You’ll need to work together with your fellow agents to choose which characters to inhabit… and you might meet some new ones along the way!

You’re returning to a time of neon colors, shady characters, and confetti—which I still can’t seem to get out of my clothes no matter how hard I try—and I wish you the best of luck, agents. But please remember: you’re not there to alter or tamper with the temporal loop, only to observe. I cannot stress this enough.

Lumen Fidei is the fifth expansion for T.I.M.E Stories, inviting you and your friends to travel back to Medieval Spain near the end of the Reconquista. Lumen Fidei is now available at your local United States retailer.

Travel back to 1419 and Reconquista Spain in Lumen Fidei, the fifth adventure for T.I.M.E Stories!

Spain is still divided by religious conflict between the Christians and the Moors, but in the midst of this conflict, a supernatural power is rising, tied to an unnatural stone. Your mission is to travel back to Spain, recover the stone, and return it safely to the T.I.M.E Agency. Enemy agents have been sighted in the time stream as well, so you’ll need all your wits about you as you travel back to medieval Spain!

Welcome, agents. We don’t have much time. After all, you could be embarking on your next mission as early as today—the mission we’ve designated Lumen Fidei.

No one here at the T.I.M.E Agency can predict exactly what you’re going to find, but we’ve done our best to acquaint you with what we currently know in our advance briefings.

Of course, you know the destination of your mission—medieval Spain near the end of the decades-long Reconquista—and your objective. An anomalous stone, rumored to have unexplainable powers, has been discovered in this era. Your mission is to travel into the past and retrieve this stone, bringing it back for safe keeping within the walls of the T.I.M.E Agency.

Prepare yourself for a horrifying journey to the frozen wastes of Antarctica!

In Expedition Endurance, the fourth expansion for T.I.M.E Stories, a temporal anomaly of the worst sort has opened up in 1914, in Antarctica. This is the year that the crew of the Endurance attempted to cross the continent and failed, and your efforts to unravel the mysteries of this temporal anomaly will carry you into a realm where temperatures drop below -40 and, as Bob warns you, there may be supernatural forces at work.

From the moment you walk into the agency, it becomes clear that this mission is serious. Bob is late, and when he arrives, he’s rattled. Sam is out of order, the techs haven’t sorted out the problem, and you’re forced to work with an old machine. All of this while you’re about to confront one of the worst temporal anomalies that Bob has ever seen…

Something has gone wrong in the Antarctic in 1914, and the time and date suggest the problem concerns the crew of the Enduranceand their goal to traverse the frozen continent. But there are signs, says Bob, that the anomaly concerns more than just the ship, its crew, and its expedition. There’s a good chance you’ll be dealing with the supernatural.

You’ll close your caisson, close your eyes, and shift your consciousness. And then you’ll feel it—the cold. It’s excruciating. Your breath will flee from you like a ghost, thinning out into the air. Your fingers will immediately start to numb. And you’ll blink your eyes—your receptacle’s eyes, really—and adjust to the darkness of the cold, cramped boiler room within which you’ll find yourself.

This is a scene of madness and despair.

The more you explore, the more you’ll begin to realize how truly daunting your task really is. The ship is frozen. There’s the stench of death all around you. The cold eats through your body. And something almost alien in nature may start to gnaw at your mind.

With its claustrophobic setting, evocative story, and measured pacing, the adventure from Expedition: Endurance easily stands among the darkest and most terrifying of horror stories. But it doesn’t just present its madness in such a way that you can stand apart from it; Expedition: Endurance introduces rules that force you to grapple with your sanity. 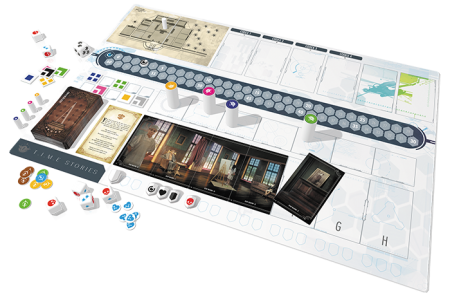 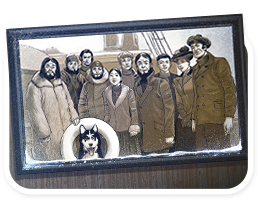 1914 NT: What really happened to the crew of the Expedition and their Imperial Trans-Arctic Expedition?

You’ve never been on a run like this before… Time has burped and buckled around the year 1914 and the Expedition‘s trans-Arctic expedition. History says the expedition failed, but history is rapidly changing, and if you don’t repair this temporal rift, history—and your reality—may fall apart completely.

In Asmodee’s new Expedition Endurance expansion for T.I.M.E Stories, when Bob gives you the mission, he appears as stressed as he’s ever been.“Alright kiddos,” he begins, “I won’t hide that the situation is dire.” He goes on to label the anomaly as one of “the worst sort.”

Meanwhile, Sam and Laura are conspicuously absent. It’s clear that tensions are running high. The office isn’t functioning at one-hundred percent. And to top it off, Bob suspects the intervention of supernatural forces…

Under the Mask, the third expansion for T.I.M.E Stories, is now available at retailers.

Surveillance units have detected a temporal anomaly on November 29th 1922, the day that archaeologist Howard Carter opened the tomb of King Tut. Unlike what was recorded in history, the pharaoh’s funeral mask was missing. Now you must act quickly; you cannot allow this temporal anomaly to disintegrate our history.

In Under the Mask, you and your fellow T.I.M.E. Agents must travel back to ancient Egypt and into the Valley of Kings. There, you must find King Tut’s mask. More than that, you must restore it to its original condition, anointing it with black henbane before placing it back into the pharaoh’s tomb.

To do this, you must first find the grave robbers responsible for looting Tut’s tomb. You might even need to become them…

Something has gone wrong. The time stream has altered, and the Middle Ages aren’t what they used to be.

Now it’s up to you to repair the temporal fault in A Prophecy of Dragons, the second expansion for T.I.M.E. Stories.

What will you find when you step into your caisson and go through with the Tachyon Insertion? Even though they use the same mechanics for tracking your time and progress, no two T.I.M.E. Stories missions are ever the same. The Tachyon Insertion process has made it possible to send your consiousness into receptacles anywhere in time and space. The result is that you can be anyone, travel to any time, and face any number of thrilling challenges. Every mission asks you to utilize a different array of skills, and in A Prophecy of Dragons you’ll need to use your minds, your muscle, and your magic to solve the most unusual of mysteries…

A Prophecy of Dragons uses the same elegant mechanics for hiding and revealing information as all other T.I.M.E. Stories missions. Each time you travel to a new location – starting with the T.I.M.E. agency base—you create that location with an array of cards. To explore it, you and your friends must move through it, placing the tokens that represent your receptacles adjacent to the section you wish to investigate. 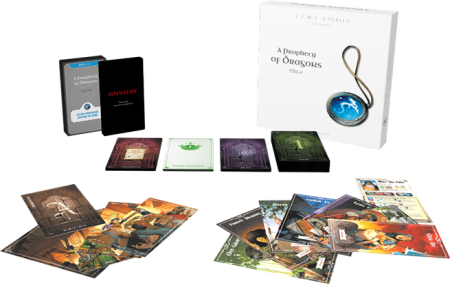