The Deck of Justice is a ridiculously frantic, yet highly tactical, hand-drawn card game for 2-5 players. Players take turns striking one another (with fully loaded heroes, armored vehicles and bulging biceps) in a series of quick cowboy standoffs until there is only one survivor.

The game is basically a parody of all the (weird) stuff we love about Japanese cartoon…with a Tarantino-ish homage style to the 80s (and 70s)…encapsulated in an outrageously fast-paced card battle mechanics. It takes 2 minutes to learn and a lifetime to explore over 7 billion combinations of different combos and strategies.

Finally, the deck is on sale and AVAILABLE FOR PURCHASE!!! Happy Birthday #ChuckNorris Grab your copy now. The Deck of Justice is a ridiculously frantic, yet highly tactical, hand-drawn card game for 2-5 players. Players take turns striking one another (with fully loaded heroes, armored vehicles and bulging biceps) in a series of quick cowboy standoffs until there is only one survivor.

Clash Yunval is a strategy card game where the effective use of combos and risk calculation rewards the best tactician. This fun and easy to learn game offers an array of choices to be made as the battle progresses. Careful unit deployment, knowing when to push an assault, and combining the effects of your units will maximize your impact in battle.

In “Historia Ex Astris” summon the powerful Archangel, Necro Bruiser, Golem, and Forger and maximize their potent abilities! The Set 1 Box has everything you need to play and plenty of variety between every match! Games are frequently close to the end and things escalate quickly, allowing more matches to be played.

There are 42 unique cards in the Box. One game box is sufficient to play the game with 2 to 6 players (dice/counters-tokens are not included). Future sets (game boxes) are all designed to work as a complete game on their own. You can, however, freely mix sets if you wish! Some crazy combos and shenanigans become possible then. Even if a playgroup has just one Box, the game is no less tooth-and-nail in terms of strategy and combo synergies! Note that when playing for the first time, it may be a good idea to try 2 player first before trying 3+ players… the rules are the same, but the gameplay dynamics change with more players. 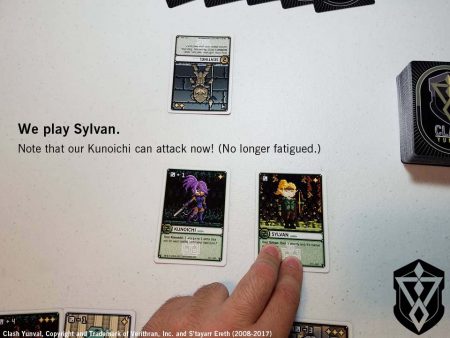 Two–Seventy: An Election Game from jschenthal ‘s Games is available now through The Game Crafter.

In Two-Seventy, two teams, each as republican and democrat, compete in a wild race to spend money, play effect cards, and attempt to win electoral votes in order to win the election. Anything from corruption to swing states to delegates are all covered in this mock-election game.

A failed Kickstarter doesn’t always mean the end of a project. Such is the case with Reign. The initial Kickstarter failed to fund, but that doesn’t mean you can’t get the game. It is now available through The Game Crafter.

Reign: The Card Game is a game of diplomacy, deceit and domination for 3-7 players aged 12+. Players are thrust into the role of a Lord or Lady vying for rulership of Kazath, a medieval fantasy realm. They must gain the support of a house, secretly bidding for influence over them. Then, using their cunning and guile, they must work to forge alliances and undermine their opposition. Once the battle lines are drawn, their armies clash in an epic battle for the Onyx Crown. Finally, the new Regent rewards those loyal to their rule, handing out spoils and gaining legitimacy. Gain 9 legitimacy points and hold the Onyx Crown to be named the true ruler of Kazath.

Do you have what it takes to Reign?

Michael Groll’s Games has just released Operation: Dandelion through The Game Crafter for $39.99.

It is the final stage of the 9th five-year plan and the oblast Odusad is still behind the expectations of the State Committee for Agriculture. After poor harvests in the prior years things finally look better and the comrades are looking forward to a bountiful harvest. The pumpkins are tall as tractor wheels and the flowers smell sweeter than ever. If only those pesky weeds will not spoil everything. The head of the Kolkhoz “Druzhba” has proclaimed the “Operation: Dandelion” in order to get rid of the weeds before they completely take over the farm.
All the comrades will have to work together if they want to save the harvest and fulfill the five-year plan. It will be challenging, but it can be done!

“Operation: Dandelion” is a leigt-weight cooperative family board game. It is played over 5 rounds. During each round additional weed tokens will be placed onto the Farm Tiles while the players will move around and clear the fields from these weeds. They have only a limited number of actions available and as the game progresses it becomes more and more challenging to keep the weeds under control. Farm Tiles can be overgrown, the oblast government might send additional support and the players can work overtime – but will it be enough?

Operation: Dandelion plays ages 12+ in under 30 minutes for 1 to 4 players. 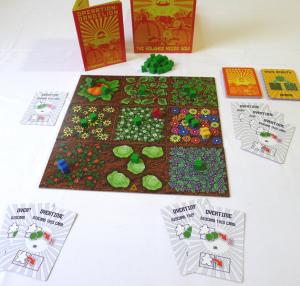 A brand new saloon has opened up in town, and everyone is in line to try and get in.

Deadline Saloon is a game about waiting in line.

In a godforsaken town in the wild west a new saloon has opened. Citizens are scrambling for the admission in hopes of free booze. With wise and smart decisions you need to help them to achieve their goals and at the same time impede on other players as much as you can. Each citizen has unique capabilities supporting their admission but your decisions and tactics can make them succeed in this entertaining card game.

Colors and Numbers, just released by Lucky Games, is being described as a cross between Carcassonne and Dominoes. 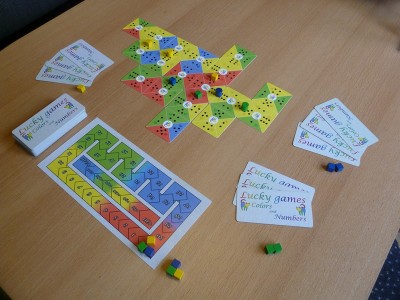 In this colorful game you play one card each turn. Each card makes the “game board” a little bigger. Every card has to match its neighbors, either in color or in number of dots. Depending on the rule-set you use, you either score points directly by playing your card, or you get to place a pawn that will help you claim a territory. Each territory you have claimed this way will score you points later on in the game.

Inside the box  you’ll find:

Colors and Numbers is available now for $19.99 on The Game Crafter.  They also have a Dutch version available if you’re so inclined.

Phantom Nimbus Games has announced Potions Class on The Game Crafter. The game is a combination card and dice game that uses dice in a press-your-luck mechanic that has you trying to complete potions in class before the other players do. You can play it safe, or try to push yourself harder with the chance of everything falling apart. 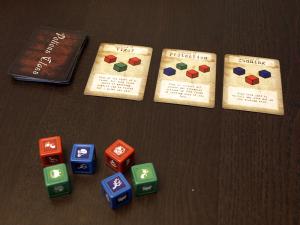 Potions Class sells for $19.99 and plays in under 60 minutes with 2 to 6 players. The rules are freely available to download.

Press-your-luck to be the first student to pass Potions Class. Roll the dice to score points and craft potions to stay ahead, but be careful—your classmates can brew trouble!

Take a risk and roll the dice in a magical potions class. Complete rounds of potion making to accumulate points and be first to pass the class. Play it safe by earning extra credit along the way or press your luck to finish first and risk flunking out. Craft your own concoctions to jump ahead—may the cleverest student win!